Young Detroit Performers Beat the Odds; See them in Nashville 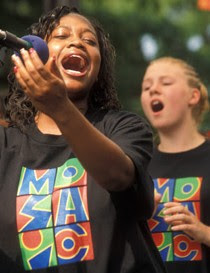 In a city where less than half of its public school students graduate high school and a third of its students opt out of that traditional system to attend charter or suburban programs, at least one man continues to have high expectations for young people.

Rick Sperling, the founder and CEO of the Mosaic Youth Theatre of Detroit, expects great things from his students--including those who come from some of the worst blighted and neglected neighborhoods in the city. Sperling's staff at Mosaic trains young people from the ages of 12 and 18 in performance arts, vocal music and stagecraft.

When Sperling’s play, Now That I Can Dance—Motown, 1962, debuted two years ago, the entire production was run by Mosaic students, including directing, backstage tech, and marketing. “We can be there to train them, to give them the expertise they need, but from there they can do it themselves,” Sperling told NPR reporter Celeste Headlee.

Mosaic has experienced remarkable success with its theatre and singing group, The Mosaic Singers. The teens have toured Europe, Asia and Africa. They have performed in the Super Bowl XL Festivities and the 2007 Detroit Mayoral Inauguration. They’ve opened for notable performers such as The Temptations and Maya Angelou. More than 95 percent of Mosaic trainees attend college and many have gone on to prestigious universities such as Julliard, New York University and CalArts.

Creative Artists of Tennessee will sponsor a performance by the phenomenal Mosaic Singers in Nashville on Saturday, February 17, at St. Luke CME Church, 2008 28th Avenue North in Nashville, 4:00 p.m. For tickets, call 248-935-6639 or send an e-mail to Quintellacats@aol.com. Don’t sleep on this event!

The focus of Creative Artists of Tennessee (CATS), a non-profit orgazination, is to educate the public and create an awareness and appreciation of Africa and the African American experience through drama, visual art, spoken word, textiles, and music. The ultimate goal is to foster an environment of cultural enrichment for all segments of the population, regardless of race, social, or econmic status, sexual orientation, age, gender, or religion.
Posted by Cappuccino Soul at 2/12/2007 03:07:00 PM