Here's Gigi's contribution to Sheryl Oring's "I Wish to Say" performance art piece, created during the DNC in Charlotte. 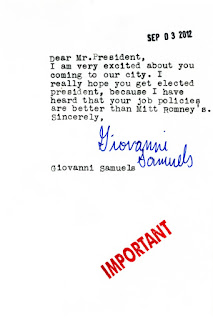 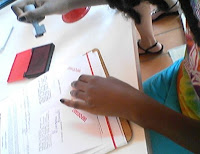 Come See Beasts of the Southern Wild, Talk and Eat After

Women, young and mature, are invited to view "Beasts of the Southern Wild" and gather after the film to talk about the strength and empowering spirit of the main character and what we can learn from this fiesty little girl named "Hushpuppy."

As I was reading the Sept. 10 Time magazine special convention issue titled “The Democrats,” I was especially drawn to two articles. One is about Vice President Joe Biden and the other is a brief tidbit in The Culture section about the lead character in Beasts of the Southern Wild.

Regarding my Delaware homie, Joe Biden:

This is at least the second article I’ve read about Biden that talks about his ability to warm up the crowd and identify with the everyday man and woman. In his article, “Let There Be Joe,” David Von Drehle discusses how Joe’s ability to schmooze with the people compliments Barack Obama’s coolness  -- in other words, the Obama-Biden ticket is well balanced.

Biden is Dixieland swing, Obama is Miles Davis. Biden's a banana split, Obama is grapefruit sorbet. Biden's a bubble bath, Obama a dip in a Minnesota lake. In the coming campaign for the hearts and minds of America’s remaining undecided voters, the hearts part is Biden’s brief.


No wonder. Biden, who affectionately calls his wife “Jilly,” and gives her all the credit for healing his family after losing his first wife and young daughter in a tragic car accident, seems to genuinely identify with and care for the hearts of Americans. When a woman at a diner said she might just invite him to visit the Walmart where she works, he tells her, “ I’m like a poor relative. I show up if I’m invited.”

And I bet he would. He’d probably even help to bag some of the groceries.

The very description of Beasts of the Southern Wild is enough to make me want to see this highly imaginative film, directed by Benh Zeitlin. Quven-zhané Wallis plays Hushpuppy, a 6-year-old who lives in a fictional town on the Louisiana coast struggling to survive a Katrina-like storm. The levees break and most of the animals die off in this fantasy tale about a girl whose resilience and imagination help her to not only stay alive, but also to save her ailing father and overcome the devastation. The glimpse of poetic voiceover by Wallis draws me even more to this story:

“When all goes quiet behind my eyes, I see everything that made me, flying around in invisible pieces. Me and my daddy, we stay right here. We who this earth is for.”

Time writer Lily Rothman calls Wallis a breakout star who "could become the youngest actor ever nominated for an Oscar.” I sure would like to see that. I will definitely see this film very soon.
Posted by Cappuccino Soul at 9/13/2012 10:48:00 AM No comments:

CarolinaFest: Kickin' Off the DNC 2012 in Charlotte


CarolinaFest 2012 kicked off the Democratic National Convention in Charlotte yesterday with crowds so thick, you’d think you were in the middle of rush hour madness in midtown Manhattan instead of uptown Charlotte. Once we found a LYNX Light Rail station that had available parking spaces where we could leave our car before boarding the commuter train uptown, we waited with the crowds on the platform for the train to take us to the excitement. I’m glad we went, as we got to see and feel the vibrancy coming from all the people who flocked to the city from all over the nation and probably other countries.

-- We got to hear some live music including West End Mambo, Jeff Bridges, and James Taylor. (I’m so sorry that we missed Anthony Hamilton sing the national anthem. I didn’t know until TODAY that he was scheduled to sing yesterday.)


-- Entrance to most of the museums was free and so we ventured into both the Mint Museum (one of our favorites) and the Bechtler Museum of Modern Art.


-- We got lots of exercise! We had to walk from the Park and Ride area to the LYNX, and many blocks to get to the festival and through all the festival events. Phew!


-- Our attendance at CarolinaFest confirmed my decision to watch the DNC activities on TV, like folks in other parts of the country. I wouldn’t want to be in the middle of all that commotion for four days!


-- Gigi participated in a performance art project, staged by an assistant professor of art at UNC Greensboro, Sheryl Oring, at which the public was invited to dictate a postcard to the President. Oring organized a pool of typists at the Bechtler Museum, who asked Gigi and lots of other visitors what they would wish to say to the President if they could talk to him. The visitors dictated their responses as the typists, all dressed in 1960s style dresses and makeup, typed the responses on small sheets of white paper, using manual typewriters. The original copy of the postcards will be sent to the White House. I won’t divulge Gigi’s response entirely, but it had to do with supporting President Obama because of Romney and his policy ideas.


-- We tried to do this Presidential Experience tour on Friday, but it started raining and we couldn’t find the place – we walked for blocks and blocks looking for it. Maybe we’ll have more luck, when the parking ban is lifted uptown and we can actually park closer to the place.


Now, we’ll just sit back and relax at home while we watch the Democrats do their thing and observe President Obama accept the party’s presidential nomination. I’m expecting lots of good speeches, along with some surprises and laughs.

As Mos Def used to say at the beginning of HBO’s Def Poetry Jam – “Let’s Get it Goin’!”