Here's my family at Christmas time! 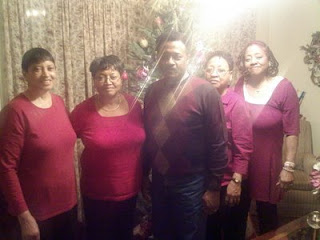 I Know I've Been Changed

Honesty is More than Just a Word

This Train is Bound for Glory/Oh, Mary Don't You Weep

This Train Is Bound For Glory

And here are The Caravans singing, Oh Mary Don't You Weep

Ruined: A Play about War and Prostitution

"You will not fight your battles on my body anymore."

You'll hear these words spoken by Salima, a character in the play "Ruined," if you get to see this production at the Manhattan Theatre Club in New York next month. In the piece, Salima and some other women in the Democratic Rebublic of Congo have become prostitutes in order to survive, after being tortured and raped by soldiers fighting in a civil war Republic of Congo.

Playwright Lynn Nottage based "Ruined" on the present-day plight of the women and girls in the Congo who are defiled everyday in this region. In the play, Mama Nadi, the owner of a bar and brothel in the rainforest jungle of the Congo, purchases women for prostitution. She offers the women what she sees as the lesser of two evils -- they can sell their bodies for money or continue to be tortured and raped by monstrous fighters.

"In this world, the circumstance that draws the greatest alarm is women who are, as the title tells us, "ruined," who have been raped so horribly that prostitution is an impossibility," writes Steven Oxman in the November 17 issue of Variety. The play begins with a Congolese man talking Mama Nadi into accepting his "ruined" niece Sophie into her brothel in an attempt to protect her from the vultures outside the doors of her establishment.

Salima has come to Mama Nadi's place seeking refuge from the rape and her unsympathetic husband who threw her out after she was violated. Salima, whose husband now sees her as "ruined," ends her inner angst by killing herself.

Alexis Greene writes this about the play and its subject matter in the summer 2008 issue of On the Issues: A Progressive Woman's Magazine

Nottage, who received the MacArthur Foundation’s so-called “genius” award in 2007, believes it’s her “social responsibility” to shine a light on issues and situations that often do not make the headlines.

Nottage and Kate Whoriskey, the play's director, could not enter the Congo, which was still in the middle of its own (ten-year) war. But they flew into Uganda, where Amnesty International, for which Nottage had once worked, set up interviews with Congolese refugee women.

The stories the women told were horrific.

“Regardless of age, social status or race—in one case we interviewed a white woman who was a refugee—they all had one thing in common,” says Nottage. “They had been raped. [They were violated brutally] with things like bayonets,” she said.

Mutilated and shamed, the women found themselves to be outcasts. “Their husbands had rejected them,” says Nottage. “Their communities had rejected them. Friends didn’t want to take them in, because they had leakage and smelled of urine. They needed money for medical expenses and operations, and the only thing they could do was turn to prostitution.”

"Ruined" will begin limited previews at the Manhattan Theatre Club, 131 West 55th Street, on Wednesday, January 21, 2009 and open Tuesday, February 10. See it if you can.

Below: Lynn Nottage, author of "Ruined" 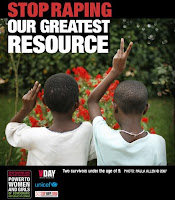 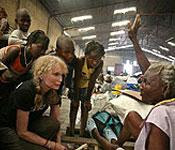 The Right to be Children of God

He was in the world, and though the world was made through him, the world did not recognize him. He came to that which was his own, but his own did not receive him. Yet to all who received him, to those who believed in his name, he gave the right to become children of God -- children born not of natural descent, nor of human decision or a husband's will, but born of God.

We may wonder whom can I love and serve?
Where is the face of God to whom I can pray?
The answer is simple. That naked one. That lonely
one. That unwanted one is my brother and my sister.
If we have no peace, it is because we have forgotten
that we belong to each other.

Coded Language and the Drug World

New York's Daily News reveals a disturbing practice that's happening on Craigslist. The newspaper highlights some shady deals on Craigslist New York, but I would venture to say that these same tricky posts have landed on Craigslists from various cities in the country and perhaps even the world.

Special narcotics prosecutor Bridget Brennan has enlisted prosecutors from around the country and has also requested that Craigslist CEO Jim Buckmaster help with an investigation into the drug dealing capers on Craigslist, the Daily News reports.

Secret Language has been used to solicit drugs on the popular Web site. Here are some of the coded posts from New York City that the December 8 issue of New York magazine brought to readers' attention. See if you can decipher the codes:

Where's Tina?
I want my boyfriend to meet Tina. It'll be his first time meeting her. Actually it would only be my second. We prefer to get together before 8. Earlier would be better ... but whatever's good for you ...

Here's an excerpt from last month's Daily News story by Patrice O'Shaughnessy about this activity:

Drug dealing on craigslist has become so rampant that the city's special narcotics prosecutor has asked the online trading post to curb the ads, the Daily News has learned.

Bridget Brennan's undercover investigators have bought drugs offered on craigslist personals from dealers ranging from a Citigroup banker to an Ivy Leaguer to a violent felon using a halfway house computer. In the past four years, her office has prosecuted dozens of dealers ...

"Despite devoting considerable resources to prosecuting these cases, drug dealing is still thriving on craigslist," Brennan wrote craigslist CEO Jim Buckmaster. Brennan said she was inspired to act by a recent agreement between craigslist and attorneys general from 40 states to curb prostitution ads ...

Ten days ago, craigslist unveiled sweeping new measures, in partnership with law enforcement and the National Center for Missing and Exploited Children, to stop its ads from being used for prostitution, child exploitation and other illegal activities.

Brennan says the idea could be applied to drug ads.

"I would like members of my staff who have an expertise in prosecuting Internet drug sales to meet with you and explore ways to curb drug dealing on your Web site," her letter says.

In an interview, Brennan said the best course is "to work with them to screen out sellers. They would have to focus on commonly used terms and develop screening mechanisms.

"They'll offer ski tickets in July in New York, and Tina Turner tickets when she's not performing in town." Marijuana ads are more, er, blunt. It is usually referred to by name or as "420."

"We see lots of professionals, people with good jobs, doing it," Brennan said. "They are shocked to get caught."

Developing International Scholars in Our Schools

In a country, such as ours, which is becoming more and more culturally diverse everyday (thank God), we need such programs to prepare our children for the changing nation and world developing before us.

IB instruction, which many times includes a Character Education component, nurtures students' curiosity about the world and instills in them positive expression and attitudes. The IB Attitude for December is EMPATHY. This is defined as “Imaginatively projecting yourself into another’s situation, in order to understand his/her thoughts, reasoning, and emotions. Caring for and showing concern for the well being of others.”

Let’s all make an oath to practice this attitude, not just for December, but for life –- what do you say?

These programs encourage students across the world to become active, compassionate, and lifelong learners who understand that other people, with their differences, can also be right.