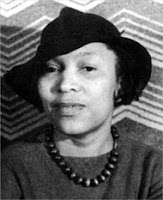 
Air out: leave, flee, stroll
Astorperious: haughty, biggity
Bam and down in Bam: down South
Beating up your gums: talking to no purpose
Big boy: stout fellow, in South it means fool
Blowing your top: getting very angry; occasionally used to mean, He's doing fine
Boogie-woogie: type of dancing and rhythm, in South it meant secondary syphilis
Butt sprung: a suit or a skirt out of shape in the rear
Cold: exceeding, well, etc
Cruising: parading down the avenue
Cut: doing something well
Diddy-Wah-Diddy: a far place, a measure of distance
Dig: understand
Draped down: dressed in the height of Harlem fashion
Dumb to the fact: you don't know what you are talking about
First thing smokin’: a train
Function: a small, unventilated dance
Get you to go: to force the opponent to run
Git up off of me: quit talking about me
Go when the wagon comes: You may be acting biggity now, but you'll cool down when enough power gets behind you
Gut-bucket: low dive, type of music
Hauling: fleeing on foot
I'm crackin’ but I'm fackin’: I'm wisecracking, but I'm telling the truth
I shot him lightly and he died politely: I completely outdid him
Jig: Negro, a corrupted shortening of Zigaboo
Jook: a pleasure house, in the class of gut-bucket
Jooking: playing a musical instrument or dancing in the manner of the jooks
Juice: liquor
Jump salty: get angry
Knock yourself out: have a good time
Lightly, slightly, and politely: doing things perfectly
Mammy: a term of insult
Miss Anne: a white woman
Mister Charlie: a white man
My people!: sad and satiric expression in the Negro language
Now you cookin' with gas: now your talking
Peeping through my likkers: carrying on even though drunk
Righteous rags: the components of a Harlem-style suit
Rug-cutter: originally a person frequenting house-rent parties, became a good dancer
Russian: a Southern Negro up north, "Rushed up here"
Solid: perfect
Stomp: low dance
Sugar Hill: northwest sector of Harlem, near Washington Heights, many professionals
Woofing: aimless talk
Your likker told you: misguided behavior
Zigaboo: a Negro
Posted by Cappuccino Soul at 8/24/2011 02:54:00 PM 1 comment:

“You ask me, whether I approve of violence. I mean, that just doesn’t make any sense at all. Whether I approve of guns. I grew up in Birmingham, Alabama. Some very good friends of mine were killed by bombs. Bombs that were planted by racists. I remember from the time I was very very small, I remember bombs exploding across the street – our house shaking.” – Angela Davis


The friends that Ms. Davis speaks of are the children (four little girls) who were killed in the 1963 Sixteenth Street Baptist Church bombing in Birmingham. On September 15, 1963, a white man was seen getting out of a white and turquoise Chevrolet car and placing a box under the steps of the Sixteenth Street Baptist Church. Soon afterwards, the bomb exploded killing Denise McNair, 11, Addie Mae Collins, 14, Carole Robertson, 14, and Cynthia Wesley, 14. The four girls had been attending Sunday school classes at the church.

I think we could argue that the legacy of the Black Power Movement really hasn’t been properly placed in context. Historically vilified by some, or fetishized by others, its effect and influence on other political movements still isn’t widely acknowledged and celebrated, unlike the earlier Civil Rights Movement. Swedish director Goran Hugo Olsson’s empowering Sundance 2011 entry, The Black Power Mixtape 1967-1975, produced by Danny Glover, attempts to contextualize the movement, at home and abroad, highlight its successes and failures, and note its importance today; it wants to raise awareness and reignite penetrating discussion in the movement, by introducing it to a new global generation, in a format that may be more accessible to them – the concept we call the “mixtape,” hence the title. The story goes… the late 60s/early 70s saw Swedish interest in the US Civil Rights Movement peak; and with a demonstrated combination of commitment and naivete, Swedish filmmakers, armed with 16mm photography and sound equipment, driven partly by what they perceived to be a shared objective with the Black Power Movement (broadly, equal rights for all), traveled across the Atlantic to investigate and explore that specific movement, in order to confirm or nullify its purposefully negative portrayal by the U.S. press.
Posted by Cappuccino Soul at 8/16/2011 08:29:00 PM 2 comments:

Joe Arroyo, a Colombian songwriter, singer and bandleader whose pan-Caribbean salsa hybrids and historically conscious lyrics made him one of his country’s most respected musicians, died on Tuesday in Baranquilla, his adopted home city in Colombia. He was 55.

The cause was hypertension and fluid in the lungs, his manager, Luis Ojeda, said.

His death drew tributes from Juan Manuel Santos, the president of Colombia; the Colombian pop singer Shakira, who appeared in concert with Mr. Arroyo; and the Colombian rocker Juanes, who often performed the Arroyo hit “La Noche” in concert.

And it was mourned throughout Colombia. Fans thronged his funeral at a cathedral in Baranquilla on Wednesday in an outpouring of grief, and Cartagena, the Caribbean coastal city where Mr. Arroyo was born, declared two days of official mourning, with flags flown at half staff and Mr. Arroyo’s music played in the historic city center. The Latin Recording Academy said it would award Mr. Arroyo a posthumous Prize of Musical Excellence in November.

Mr. Arroyo claimed his own genre in Caribbean music: Joesón. His songs drew their danceable rhythms from traditions within Colombia, including cumbia and porro, and from all around the Caribbean, with elements of Dominican merengue, Jamaican reggae, Martinican zouk, Trinidadian soca, Cuban son montuno and more.

He had a high, fervent tenor voice, and the songs and arrangements he wrote were driven by supercharged horns and percussion. Although there were many love songs and party songs among his dozens of Latin American hits, Mr. Arroyo’s signature song was “Rebelión,” about a 17th-century slave uprising in Cartagena, with its chorus, “No le pegue a la negra” (“Don’t hit the black woman”). He named his band La Verdad — the Truth.