Gigi was inspired to make a soup yesterday and came up with this recipe. She cooked it last night (with a little help from her mom) and it was a tasty delight!

Two large potatoes (diced)
One and a half cup baby carrots (sliced)
A cup of mushrooms (sliced)
Two onions (diced)
Two tomatoes (diced), or one can of diced tomatoes
About 1/4 cup olive oil

As much of the following seasonings as you want: oregano, seasoned salt, cayenne pepper, cilantro, parsley, curry and basil.

About 40 ounces of vegetable or chicken broth.

Here's an example of the power of uniting. (This video and text were created by the Afrolatinoforum Channel):


[Afro-Latinos have been grossly undercounted in previous census drives.] Such an undercount not only denies the African aspect of Latino identity, it deprives organizations of resources they need to improve the lives of this community.

By proclaiming Check Both!/¡Chequea las dos! the bilingual media spots highlight the importance for Latinos of African descent to self-identify as such on the Census.

The implications of the count are far-reaching, determining how $400 billion in federal funds are distributed to local governments each year. Over 10 years, a community could lose a projected $1.2 million of federal funding for housing, health and education programs for every 100 persons that are not counted, according to the NAACP. Studies have established that despite a higher educational level, Black Latinos have the highest rate of unemployment and are more likely to live below the poverty level than other Latinos.

Finally – with the passage of the healthcare bill, I’ll get some healthcare coverage, along with millions of other uninsured residents of this country.

“Health care is not only a civil right, it’s a moral issue,” said Representative Patrick J. Kennedy, Democrat of Rhode Island, who invoked the memory of his father, Senator Edward M. Kennedy, a Massachusetts Democrat and a lifelong champion of health care for all.

Our Dominican Brothers and Sisters

When I read about Los Angeles Angels baseball player, Torii Hunter’s comments regarding some Latinos posing as “black imposters” in the Major League Baseball association, I was not surprised and somewhat amused.

During a 5-day USA Today panel, formed to discuss how to improve professional baseball, Hunter said the MLB reaches out to Latino players from places such as the Dominican Republic and Venezuela, instead of giving more attention to African-American players in urban areas of the U.S.

“People see dark faces out there, and the perception is that they’re African American,” Hunter said at the USA Today event. “They’re not us. They’re impostors,” he said. “Even people I know come up and say, ‘Hey, what color is Vladimir Guerrero? Is he a black player?’ I say, ‘Come on, he’s Dominican. He’s not black.’ ”

The whole discussion about whether some people from the Dominican Republic, Puerto Rico, Costa Rica, Cuba, Colombia, and other “Latin American” countris are black, could and has prompted lively debates, scholarship, and investigation. The subject is complex. The African slave system brought Africans, not only to the shores of South Carolina, North Carolina, Virginia, and other places here, but also to lands such as, what is now known as Cuba, Puerto Rico, the Dominican Republic, Ecuador, Colombia, etc., and enslaved. Did the Africanness of those people somehow disappear? Of course not.

Isn’t it obvious by the very look of many African Americans and “Latinos” that we are multiracial? We were brought here and there, brutalized and oppressed, and eventually were mixed with the whites (by force or otherwise), and the indigenous people (American Indians in this country, Tainos in places like the Dominican Republic).

So when people like Hunter contend that people who obviously have African ancestry, are not “black,” you wonder where the disconnect comes from. For the most part, I think it comes from a lack of education about the history of slavery in this country, the Caribbean and other parts of the world. Sadly, the U.S. education system often fails to educate students about African-American and/or world history in an in-depth and insightful way.

I don’t know how Guerrero racially identifies but to suggest that he’s not black simply because he hails from Latin America is ridiculous. Do black people solely exist in the United States or in Africa?

Hunter’s statement is even more preposterous when you consider that the Dominican Republic shares the island of Hispaniola with Haiti. No one questions whether or not Haitians are black, but time and time again, it seems that Americans have difficulty grasping that one can be both black and Latino.

This becomes more perplexing considering that even the U.S. government designates Hispanics as a group that can be of any race — black, white, Native American, etc. Clearly, there are cultural differences between blacks from the United States and blacks from Latin American countries, but to suggest that the latter aren’t actually black presents a myopic view of blackness.

And given that many blacks in Latin America still practice customs directly tied to their pre-slave trade West African roots, while black Americans have lost many of these traditions, makes the suggestion that Afro-Latinos aren’t authentically black doubly offensive.


I asked my friend Ironelly Mora, a Nashville, Tenn. resident, who is from both Brooklyn and the Dominican Republic, to comment on Kareem’s article. Here’s what Ironelly had to say:

This article doesn't surprise me at all -- especially when many Latinos do separate themselves from the African American community. I guess being Latino and brown-skinned means being black for some people, but it doesn't serve a larger purpose because there are so many differences between the Latin American countries. Many times even the way we speak Spanish is different. So I think it is convenient to lump Latinos and blacks into the same minority group, but the issue is very complex. I disagree with Hunter saying black Latinos are imposters. I don't think Dominicans, especially the baseball players, describe themselves as blacks. We as Dominicans have issues with the idea that we descended from slaves and not the Taino Indians.

So my two cents worth is this article doesn't bring to light the fact that Latinos don't often acknowledge their black heritage and the colonization by the Spanish encouraged us to forget the relationship to Africa even existed. There is so much to say, where do I begin.

My reply to mi hermana:

That's the point. There is so much to say, and you started beautifully. Now to get other Latinos and African Americans to do the same!
As you say, “The issue is very complex.” We’ve got to start somewhere. 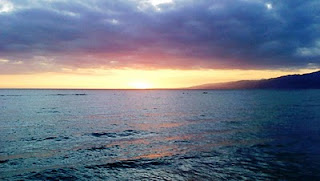 Thanks to mi amiga Cheryl in Los Angeles, we get to see the plush waters of the Pacific Ocean and the brilliant rays of the sun going down. Cheryl took these luminous shots at the Santa Monica Pier with her cell phone camera. (Do your thing girl.) 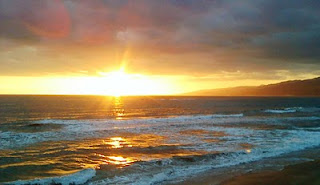 I wandered aloud if I can do all the things that are in front of me, and my dear friend Cheryl reminded me that I can, because God WILL make a way, just like he's done thus far. Thank you sister Cheryl and thank you Lord for making a way and allowing me to use my gifts.

Reprise: Bennie Benjamin was a Man! 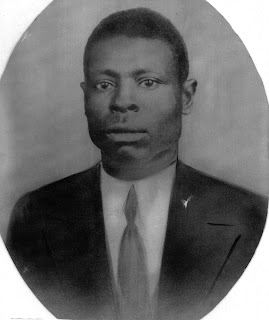