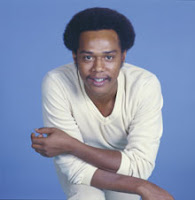 Not only did I not know that this guy was from North Cakalacki (North Carolina) -- but I also didn't know that he helped to create the comedy show, Good Times. Born on November 3, 1949 in Salisbury, N.C., Mike Evans, known to many fans as Lionel Jefferson from the television show, The Jeffersons, co-wrote over 130 episodes of Good Times.

When his double duties as actor on one show and writer on the other proved to be too much, Mike Evans focused all of his attention on helping to mold Good Times. He was replaced by Damon Evans (no relation) for several years, until he returned to the cast of The Jeffersons in 1979. I personally preferred Mike to Damon, but both were entertaining and added their own flavor to the show.

I am very sad to here this on line he was once my cousin husband from ethiopia, I had very nice time in los angeles and very generous person, I was just checking what happen to him and i find out accidently

Wow. I can't imagine hearing the sad news this way. I'm so sorry. I'm sure he was a good person.
Peace to you,
Alicia