Artificial Intelligence Explanation Even I Understand

I was honored when, earlier this week, my friend Adelson de Brito, a Professor of Physics in Brazil, decided to break down some very scientific information about Artificial Intelligence, in a way that even I, more of an artist than academic, can understand. Here, Adelson (who speaks Portuguese and many other languages) writes simply and beautifully about professor Andrew Ng’s research, AI, and algorithms — concepts I probably would have no hope of grasping had it not been for Adelson's fine craft as a teacher. Adelson’s students are blessed to have him. Thanks again Adelson!


This documentary is a long time coming. For those who know all of the shades of Wilmington, Delaware, UP CLOSE, the devastating effects of an ineffective education system and lack of job opportunities in the city is not news. Now the documentary, The People's Report, brings the despair and dichotomy between the haves and have nots in Wilmington to light in a most provocative way.
Kudos to Yasser Payne, University of Delaware Associate Professor of Black American Studies, who put a lot of work, research, and passion into helping to get this film made.

The People’s Report, a Teleduction/Hearts and Minds film production that reveals the in-depth details about the prolific violence and apathy in Wilmington, will be shown at the Delaware Center for Contemporary Arts next week on Thursday, May 30, 2013 at 12 p.m.

Doubling as a research project and film, The People’s Report, includes data collected by Payne and 15 Wilmington residents (21 to 48 years old) from Southbridge and the East Side that Payne trained to participate in the project. Payne and these community recruits created a survey, conducted more than 500 interviews, and analyzed their findings. His process, called participatory action research (PAR), involves using members of the target population, as part of the research team.

“We equipped them all with a skill set,” Payne told radio station WDDE. “They received two months of training, the same as doctoral students get, and they were paid $17 an hour.” Payne, who grew up in Harlem and Englewood, N.J., told WDDE that the PAR approach is effective because “the people in the community that is being studied are also experts.” Their lives are invested in the communities and so they are vigorously motivated to gather information and ultimately, to help implement change.

The opening of the film gives an overview of what’s to come, as these words are shown on the screen:

“Its violent crime rate per capita is among the worst in the nation.”

“In 2010 a team of 15 researchers, part of a Participatory Action Research project took to the streets, armed with cameras and clipboards to find out why.”

Here are some of the gripping questions the PAR survey asks:

We also learn from the film that for the first time in three years, a male student from South Bridge graduated from high school.

“The loss of jobs and quality school opportunities is predicative of physical violence,” Payne says. “We are advocating for Wilmington and the state of Delaware to find innovative ways to bring more high quality jobs and better educational opportunities to these communities.”

But Payne hopes that the intervention in the lives of the PAR team members and the issues that the film raises will help to turn things around in Wilmington.

“The PAR team is required to organize an action agenda to complement the data analysis,” Payne said. In other words, the PAR team is expected to formulate ways to make their communities better.

If you plan to be in the Wilmington area on Wednesday, May 29 — Go see this film!

Click here for more information about The People’s Report, directed by Sharon Baker and produced by Daniel Collins.

Go here to register to see The People’s Report and attend the lecture following the film.

My Peace I Give To You

"Peace I leave with you; my peace I give you. I do not give to you as the world gives. Do not let your hearts be troubled and do not be afraid." -- John 14:27

If Somebody Hurts You: Message for Children Only

What they're doing in Spain to help child abuse victims: Child Abuse Hotline Ad Uses Photographic Trick That Makes It Visible Only To Children From The Huffington Post, May 6: A Spanish organization called Fundación ANAR, or Aid to Children and Adolescents at Risk, created a bus-stop advertisement in April that features the group's hotline number for children to report abuse. But by using a process called lenticular photography, the company made the hotline number, and much of the ad's content, visible only to those under a certain height -- presumably children. Lenticular photography allows companies to create an image in a way that lets viewers see one of several different photos, depending on where they're standing. In the case of ANAR's ad, anyone taller than 4 feet 5 inches -- the average height of a 10-year-old, according to the group -- would see a picture of a boy with an unmarked face and the following message: "Sometimes, child abuse is only visible to the child suffering it." Anyone under that height would see an image of the boy with a bruised face, the organization's hotline number (116-111) in white text, and the message, "If somebody hurts you, phone us and we'll help you."
Posted by Cappuccino Soul at 5/09/2013 08:55:00 AM 4 comments:

Children and Guns -- Should those two words go together? From Harper's Weekly Review (May 7, 2013):

No Moor by Shafiq Husayn 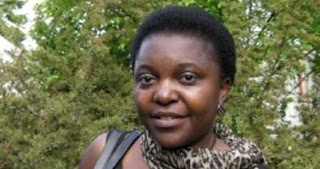 ROME — It was hailed as a giant step forward for racial integration in a country that has long been ill at ease with its growing immigrant classes.


But Cecile Kyenge’s (pictured) appointment as Italy’s first Black Cabinet minister has instead exposed the nation’s ugly race problem, a blight that flares regularly on the soccer pitch with racist taunts and in the diatribes of xenophobic politicians – but has now raised its head at the center of political life.
One politician derided what he called Italy’s new “bonga bonga government.”

On Wednesday, amid increasing revulsion over the reaction, the government authorized an investigation into neo-fascist websites whose members called Kyenge “Congolese monkey” and other epithets.
Kyenge, 48, was born in the Democratic Republic of Congo and moved to Italy three decades ago to study medicine. An eye surgeon, she lives in Modena with her Italian husband and two children. She was active in local center-left politics before winning a seat in the lower Chamber of Deputies in February elections.
Premier Enrico Letta tapped Kyenge to be minister of integration in his hybrid center-left and center-right government that won its second vote of confidence Tuesday. In his introductory speech to Parliament, Letta touted Kyenge’s appointment as a “new concept about the confines of barriers giving way to hope, of unsurpassable limits giving way to a bridge between diverse communities.”
Unfortunately, his praise and that of others has been almost drowned out by the racist slurs directed at Kyenge by politicians of the anti-immigrant Northern League party, an on-again, off-again ally of long-serving ex-premier Silvio Berlusconi, and members of neo-fascist Internet groups.
In addition to his “bonga bonga” slur, Mario Borghezio, a European parliamentarian for the League, warned in an interview with Radio 24 that Kyenge would try to “impose tribal traditions” from her native Congo on Italy.
Kyenge on Tuesday responded to the insults, thanking those who had come to her defense and taking a veiled jab at the vulgarity of her critics. “I believe even criticism can inform if it’s done with respect,” she tweeted.