Should Voting Be Mandatory in the U.S.?

Touch Not the Unclean Thing

My Nashville Pastor's sermon titled, "Daughters of Destiny" points to this scripture. I have a much deeper understanding of these words now -- much deeper. Praise God!

Do not be yoked together with unbelievers. For what do righteousness and wickedness have in common? Or what fellowship can light have with darkness?

What harmony is there between Christ and Belial? What does a believer have in common with an unbeliever?

What agreement is there between the temple of God and idols? For we are the temple of the living God. As God has said: "I will live with them and walk among them, and I will be their God, and they will be my people."

"Therefore come out from them
and be separate, says the Lord.
Touch no unclean thing,
and I will receive you."

"I will be a Father to you,
and you will be my sons and daughters, says the Lord Almighty."

Since we have these promises, dear friends, let us purify ourselves from everything that contaminates body and spirit, perfecting holiness out of reverence for God.

My Russian students, who I'm sure God sent to me on purpose -- (I had a dream about many very loving and angelic Russians eight years ago) -- treat me like a daughter, with all of the love and affection that comes with that. Typically my students like to give edible treats, but one couple gave me a gift recently that touched me deeply. It's a set of 3 CDs of Russian "church" music, as they call it. I love the music and am wisked away to a peaceful place everytime I hear the songs. On the back cover of the gift were the words to another spiritual song. This song too, I'm sure is sent from God. The lyrics resonate with me profoundly. Here they are:

The Healing Herbs that God Gave Us

One Cappuccino Soul reader expressed anxiety about life when he commented some time ago on this blog. I prayed that he’d find peace in his life and suggested some herbal remedies to alleviate anxiety and sleeplessness that I’ll share now with the rest of you.

The following herbs will help with anxiety, depression, and insomnia. I know, because I’ve used them for almost a year now and they’ve worked for me.

St. John’s Wort (I’ve used both the tincture and the capsule form)

Valerian Root (capsule – Valerian Root is pretty strong and may not be suited for everyone. I personally don’t take this one anymore.)

Passion Fruit (My Brazilian friends hipped me to this. Just eat the raw fruit or drink the juice and a sense of calm will overtake you.)

You can take these two or three times a day, but I usually wait until bedtime so that I don’t fall asleep while I’m working. But, if the anxiety is very bad, it may be necessary to take the St. John’s Wort during the day also.

If you’re unsure about how many capsules to take, or how to make the tea, send me an e-mail and I’ll give you instructions (Ramalicia@aol.com). (I must say here that I'm not a licensed herbalist or anything, I just know from my own personal study of herbs and my own experience with them).

refugee - one that flees; especially : a person who flees to a foreign country or power to escape danger or persecution (Merriam-Webster Dictionary)

After I showed a documentary to my students today, I reviewed some of the concepts and words used in the film. I felt a particular kinship with my students as we discussed these two ideas:

"I came to America to give my offspring a better life."

"At home, I was in constant anxiety about my family. Here, I don't have anxiety."

I only have to substitute the words "my new home" for "America" and I can sympathize completely with my refugee friends.

Race and Ethnicity in the Queen City 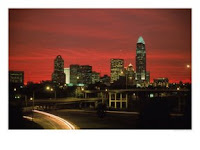 Here are some facts, taken from Charlotte’s Community Building Initiative organization, that show Charlotte’s racial and ethnic make-up. Also, you’ll find how some of Charlotte’s residents viewed the city’s “interracial trust” factor and fairness in the legal system.

I really like it here, but I see that like most other places, Charlotte has a bit of work to do to get closer to the “melting pot” that is the ideal American image.

The demographics of the population of Charlotte, according to updated 2006 Census Department figures are as follows:

15.9% of the residents of Mecklenburg County speak a language other than English at home.

The Charlotte region ranked 39th out of 40 in “interracial trust” among the 40 communities surveyed in the 2000 Social Capital Community Benchmark Survey. “Social Capital” is defined as the formal or informal networks that connect a community.

In research conducted during the CBI/26th Judicial District Resource Team project, African-American employees and Hispanic/Latinos view the system as less fair and equitable for defendants of color than for white defendants. Some whites agree.

Research conducted during the CBI/26th Judicial District Partnership Project indicated that there is no statistically significant data from the perception and case review studies suggesting disparity of treatment based on race or ethnicity in traffic or drug cases. However, many defendants (approximately 32.7 %) do not understand how the court system works or what “happened” to them in court.
Posted by Cappuccino Soul at 4/02/2008 12:14:00 PM 2 comments: