Nothing is passed over by God (because God is Holy)
Yet nothing is imputed to me….

Tupac: Can You See the Pride?

I didn't realize it before, but Tupac Shakur, who was a poet at heart, had the rhythm of Shakespeare. His poetry is almost iambic pentameter. What a shame he didn't grow wiser before his carnal, bane spirits took over. Like so many "thugs," who speak for the street, he could have done us so much more good if he could have only spoken for God.

Can You See the Pride in the Panther?
by Tupac Shakur

In the Event of My Demise
by Tupac Shakur

Often a woman struggles to be a person, not just a female. -- (Ethiopia)

A woman's beauty is not in her face. -- (Tanzania)

In celebration of National Poetry Month, here's an eloquent, hard-hitting, and passionate poem by Mexico's Octavio Paz. Here's to all of you fighting women.

Beautiful face
That like a daisy opens its petals to the sun
So do you
Open your face to me as I turn the page.

Enchanting smile
Any man would be under your spell,
Oh, beauty of a magazine.

How many poems have been written to you?
How many Dantes have written to you, Beatrice?
To your obsessive illusion
To your manufactured fantasy.

But today I won't make one more Cliché
And write this poem to you.
No, no more clichés.

This poem is dedicated to those women
Whose beauty is in their charm,
In their intelligence,
In their character,
Not on their fabricated looks.

This poem is to you women,
That like a Shahrazade wake up
Everyday with a new story to tell,
A story that sings for change
That hopes for battles:
Battles for the love of the united flesh
Battles for passions aroused by a new day
Battle for the neglected rights
Or just battles to survive one more night.

Yes, to you women in a world of pain
To you, bright star in this ever-spending universe
To you, fighter of a thousand-and-one fights
To you, friend of my heart.

From now on, my head won't look down to a magazine
Rather, it will contemplate the night
And its bright stars,
And so, no more clichés. 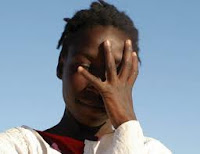 The United Nations has adopted a resolution that proclaims that this year, 2011, is the International Year for People of African Descent. The UN General Assembly affirms, “The Universal Declaration of Human Rights, which proclaims that all human beings are born free and equal in dignity and rights and that everyone is entitled to all the rights and freedoms set forth therein, without distinction of any kind,” the UN resolution states.

That’s why the documentary Stolen is such a timely piece. The filmmakers, Violeta Ayala and Dan Fallshaw, who set out in 2006, to tell the stories of people reuniting with their families in Saharawi refugee camps, stumbled upon what is evidently modern day slavery practices in the region.

While following the story of Fetim Sellami’s reunion with her mother Embarka, who Fetim hasn’t seen in 30 years, Ayala and Fallshaw discovered that Fetim, a black African refugee who was living in Western Sahara, was actually taken from her mother to live several hours away in another part of Western Sahara. Deido, the woman who took Fetim, a white Arab refugee woman, says Embarka actually gave Fetim to her. This is just one of the discrepancies that the filmmakers found. Ayala and Fallshaw began to see that Fetim was actually doing all the cooking, cleaning, and childcare in Deido’s household. The filmmakers then discovered that Fetim was not the only black person being forced to do this kind of work for no pay.

The filmmakers heard from other black Saharawis who speak out against being slaves. The black refugees are taken away from their parents, the filmmakers say. Many of them are beaten by "white-Arab" masters, the women must succumb to sexual demands by the “masters,” their names are changed, and they can’t marry without the master’s permission, the filmmakers say.

At Odds with the Polisario Liberation Front

“From the moment the Polisario authorities realized we were filming material they didn't like, they tried to stop us,” the filmmakers state on indiegogo.com. “They detained us and demanded we hand over our tapes; but luckily we'd already hidden them, hoping someone could smuggle them out later.”

According to Fallshaw, the PLF paid for Fetim to travel to Sydney, Australia to call the film a sham. Although Fetim doesn’t say that she is a slave, the evidence that the filmmakers have found strongly suggests that she is one. “Stolen doesn't say Fetim is a slave,” Fallshaw told Cappuccino Soul. “Only Fetim can answer that question. Other people in the film refer to themselves and the black people in the camps as slaves. To stand up and say, 'I'm a slave' takes an awful lot of courage,” he said.

While filming Stolen, Fallshaw told Cappuccino Soul that he and Ayala discovered that Fetim’s mother, Embarka, was purchased in a slave market in Mauritania when she was a small girl by Deido's father and he took her back to Laayoune to serve his family. Embarka was born into slavery and doesn't remember her mother or where she is from, he said. Deido is the woman Fetim lives with today and the woman who took her to the refugee camps.

Fetim was born in Laayoune Western Sahara. “When she was 3 or 4 years old she went to live with Deido in another city several hours away in Western Sahara,” Fallshaw said. “Deido says Fetim was given to her by Embarka -- Embarka says Deido took her.”

“We suspect Embarka had children to Deido's father, his brothers and sons,” Fallshaw said. “The children of slaves are automatically slaves unless the master frees them. In the refugee camps slavery officially doesn't exist. But the reality is different. All of the black people in the camps have a history of slavery in their families.”

Fetim and her people deserve to be treated as free and equal in dignity and rights as all people, just like the 2011 UN Resolution tells us. Hopefully, Stolen will focus much needed attention on the modern day slavery practice happening in refugee camps in Western Sahara and the other hellish places in the world that treat humans inhumanely.

Stolen, which has been presented at 60 festivals worldwide, has won 12 awards. The film will be shown at the 18th Annual New York African Film Festival on Friday, April 8, 6:15 p.m. and on Tuesday, April 12, 8:30 pm., at the Walter Read Theater of Lincoln Center, 70 Lincoln Center Plaza in New York City. The directors will attend both screenings.

Dan Fallshaw: We've launched a new campaign to raise funds to get STOLEN onto the big screen and get the story to the world, to bring much needed attention to the issue of slavery in North Africa.
Posted by Cappuccino Soul at 4/04/2011 03:05:00 PM No comments: