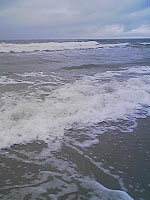 We had a ball y'all, last weekend at Myrtle Beach in South Carolina!

Gigi asked if she'd see glass on the beach. "No, baby" I said. "It's not like the beach in Brooklyn. It's CLEAN." 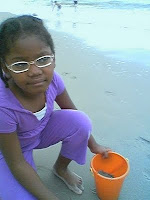 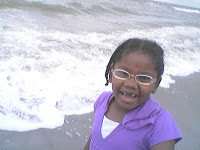 Van Gogh, O'Keefe and Gigi: The Poetry of Things 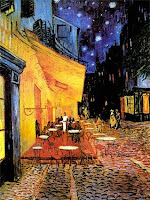 I went thrift store shopping today and found this lovely "Cafe Terrace at Night" Van Gogh print that will look lovely in the dining area. As I was leaving my second thrift store for the day, I spotted the same print and had to have it. I love hanging multiple images of the same scene or person on the wall. Like Andy Warhol, I guess it's my love of film and the idea of seeing one of many single images together that inspires me to do this.

Another great thrift store find was Georgia O'Keefe's "Pink Tulips" that has the name of her "The Poetry of Things" exhibit written below the flower. 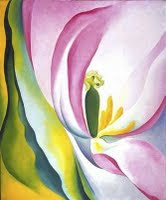 This goes nicely with some flower paintings that Gigi did at an arts summer camp. The students were introduced to the work of Van Gogh and Georgia O'Keefe and were obviously told to paint pieces influenced by these two great artists. I'll hang Gigi's Van Gogh-like paintings by that master's work in the dining area. I know we'll have delightful eating experiences among the vibrant and stimulating artwork of Gigi and Van Gogh.
Posted by Cappuccino Soul at 9/28/2009 05:24:00 PM 4 comments:

While I was checking one of my favorite blogs today, mymy, I was startled to read about an Israeli government advertising campaign that warns Jews in the Diaspora against marrying non-Jews. The ad goes on to encourage young Diaspora Jews to move to Israel.

Is it me, or is there something askew here? Why would a government that represents a group of people who have been gravely discriminated against throughout history, back a campaign warning its citizens not to intermarry with "those other people." Seems I'm not the only one perplexed by this effort. Jonathan Cook's article which appeared in the Abu Dhabi publication, The National states:

The campaign quickly provoked a storm of debate on Jewish blog sites, especially in the United States, with some terming it “divisive” and an insult to Jewish offspring of intermarriage. A link to Masa’s “Lost” campaign had been dropped from the front page of its website yesterday, possibly in response to the backlash.

The issue of assimilation has been thrust into the limelight by a series of surveys over several years carried out by the Jewish People Policy Planning Institute, a think-tank established in Jerusalem in 2002 comprising leading Israeli and Diaspora officials.

The institute’s research has shown that Israel is the only country in the world with a significant Jewish population not decreasing in size. The decline elsewhere is ascribed both to low birth rates and to widespread intermarriage.

According to the institute, about half of all Jews in Western Europe and the United States assimilate, while the figure for the former Soviet Jewry is reported to reach 80 per cent.

Israel, whose Jewish population of 5.6 million accounts for 41 per cent of worldwide Jewry, has obstructed intermarriage between its Jewish and Arab citizens by refusing to recognize such marriages unless they are performed abroad.

The advertising campaign is directed particularly at Jews in the United States and Canada, whose combined 5.7 million Jews constitutes the world’s largest Jewish population. Most belong to the liberal Reform stream of Judaism that, unlike Orthodoxy, does not oppose intermarriage.

Check out what David Duke (who now has a Ph.D in History y'all!) has to say about the ads.

Don't believe it? See for yourself: 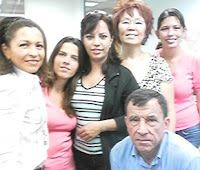 Here's a picture of my English as a Second Language class that met earlier today. We had a good time reading some Langston Hughes poems, including The Negro Speaks of Rivers and Dream Variations. The lesson was about the importance of using the correct rhythm and stress when speaking. We also focused on reading, understanding, and discussing poetry.

I had my students read a few of Langston's poems and we talked about the meaning of some of the words. We also listened to Hughes read his poetry and saw an interpretive dance/performance of Dream Variations on Youtube.

At the end of the class, I asked the students to answer the question, "What does the poem Dream Variations make you think of?"

Here are a few of the responses:

1. I think that dreams can [be]come reality.

2. With a beautiful poem and the happy Dance in the pale evening, she found her identity.

3. I remember one place in my country, I missing the river, and swimming in the clearness and the peace.

I like the poem because the dream, to make effort the black people free in the world.

I think when you try very hard you make really your dream.

Dance, dance tenderly and fling until so far

Look the mother nature, look de fleurs, the trees, the animals and you understand the life

The students shown in the picture above come from Colombia, Iran, France, and Korea. 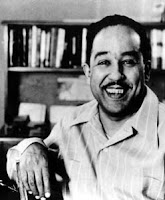 To fling my arms wide
In some place of the sun,
To whirl and to dance
Till the white day is done.
Then rest at cool evening
Beneath a tall tree
While night comes on gently,
Dark like me--
That is my dream!

Get Ready: Victor Nunez and His Spoken Word 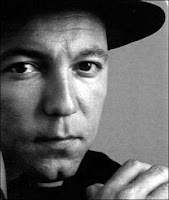 It's got New Mexico, Ruben Blades, Victor Nunez and poetry! It's a film that I certainly won't miss when it comes anywhere near me. It's Nunez's latest film called "Spoken Word" and as far as I'm concerned, you can't go wrong with a combination like that.

Nunez directed one of my favorite films, "Ruby in Paradise," which looks, sounds, and feels like a long poem. Robert Ebert has said that Nunez shows a great sympathy and undersanding of his characters. "He cares about his people, what they need, how they feel," Ebert said. I'm excited to see how the characters in "Spoken Word" feel and what they want. It's bound to be a revelation.

Nunez chose one of my favorite actors, Ruben Blades, to appear in this ode to rhythm, words, and images. Blades, who plays the father of the main character in the film, a poet, is a multi-talented performer. He's a Salsa star, holds two law degress, and ran for President of Panama in 1994. As a Salsa musician Blades can croon, dance, and make you want to get up and join the band. As an actor, he can go from sensitive to threatening, and humble to romantic. I love to see him do his thing.

"Spoken Word" is scheduled for a 2010 release date but it premiered on the festival circuit at the New York International Latino Film Festival in July. Here's a description of the film from that film festival's Web site:

When a San Francisco-based spoken word artist returns home to New Mexico to be with his dying father, he finds that he loses his "voice" as he is sucked back into his old life of drugs and violence.

"Spoken Word" takes us into the poet's mind as he attempts to forge a new, even stronger voice, and heal his relationships with his family, his community and himself.


I'll be looking out for the wide release of the film next year, but until then, here's a peek at some of the poetry that's featured in the film:


Get ready y'all: "Spoken Word"

Health Insurance for Everyone!