Gregory Barz, an ethnomusicology professor at Vanderbilt University in Nashville, has been studying the role of music in combating HIV/AIDS in Africa since 1999. In the past decade, HIV infection rates have fallen from 30 percent to 5 percent in Uganda, and Barz argues that the music of Uganda, including storytelling, dancing and instrumental pieces, has contributed to this success.

The Vanderbilt Register reported that when Barz traveled to Uganda in 1999 to record Ugandan drumming patterns, he witnessed children and adults singing about how AIDs was devastating their lives. 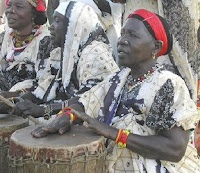 “First off, I was confronted with sick people, people who were confused … The more I listened to songs and observed dances, I began hearing that people were making meaning out of the disease and out of the virus through music and dramas and dancing,” Barz told the Vanderbilt Register. “They were singing about social problems caused by AIDS—children not having parents, a missing generation—about the sickness that was everywhere.”

When Barz returned to Vanderbilt, he helped create what’s known as medical ethnomusicology, a research field recognized by the Society of Ethnomusicology that seeks to combine the efforts of anthropologists, doctors and other health care workers, music specialists and public health policy makers.

Jim Wooten of ABC News wrote in the forward to Singing for Life that the Ugandan poetry, songs and drama documented in the book are “a collective shout being heard in their villages, in their towns, in their cities, in their schools and in their churches.”

“Together these voices form a choir which, in a way previously unexplored, is not only singing for life but saving lives, as well as educating thousands who would otherwise be unaware of the elementary facts of HIV/AIDs, of how it is transmitted, of its effects on the body and how it is prevented,” Wooten wrote.

Proceeds from Singing for Life: Songs of Hope, Healing and HIV/AIDS in Uganda will go to two agencies in Uganda: Meeting Point and the Integrated Development and AIDS Concern. The CD is available from Smithsonian Folkways Recordings.

Meeting Point, run by Noelina Numukisa, works in the slums of Uganda’s capital city of Kampala to assist orphans, provide home health care for HIV-positive women and their families and provide youth with vocational training. IDAAC supports a network of AIDS education and health care outreach to rural villages in Uganda.

Uganda is estimated to have a population of about 25-30 million. The extreme mortality of AIDS has had an effect on this figure, which would otherwise be higher. As another consequence of AIDS, healthy life expectancy in Uganda is only around 50 years.

During the early 1990s, HIV prevalence peaked at around 15% among all adults, and exceeded 30% among pregnant women in the cities. At the end of 2005, adult prevalence was estimated at 6.7%, and an estimated one million Ugandans were living with HIV/AIDS, according to UNAIDS/WHO.

AIDS in Uganda was initially known as 'slim' due to the physical wasting it caused. HIV was already spreading in Uganda on the shores of Lake Victoria in the late 1970s. It is from here that some theories suggest HIV spread to the rest of the world. The first AIDS case was diagnosed in Uganda in 1982.

Dear Anonymous,
Thanks for this compelling link. I plan to do a little more research about Meeting Point Kampala and write something about it.
Peace and blessings to you.
Alicia

dear alicia,
my name is ana, and i used to be a volunteer of the Meeting Point.. I've created the blog..
if you need more information contact me.. you can write to me on the MP's blog or on my personal one: http://placebodolphin.blogspot.com.
On my blog you can find some little movies of the kids from the MP's Learnin Center..
I'm really glad to see that there are still persons who want to help the others.
Blessings to you 2
Ana