Notes from One Sunday Morning


Here are some notes from a church service I attended several years ago. I'm glad I kept these words -- these messages are invaluable. I hope my notes move you as much as they move me -- still.

My daughter and I recently took a trip to the North Carolina Music Hall of Fame in Kannapolis and received a personal tour of this treasure spot in the birthplace of the King of P-Funk, George Clinton, who was inducted into the Hall in 2009, ten years after Doug Croft and Joe Carroll founded the space. Clinton hasn't actually seen his featured memorabilia in the hall yet -- as it's been difficult to get the funk allstar to grace the place with his presence.

Veronica Cordle, NC Music Hall of Fame representative, who so graciously gave us the tour, said she hopes to change that soon. "We've been trying to get in touch with him and just haven't had any luck," she told us during our visit. New music industry inductees are honored with a a VIP Red Carpet reception and ceremony each year in October, but Clinton didn't make it when the organization inducted him four years ago. Maybe Cordle could invite Clinton to come to the museum to sign copies of his upcoming book, Brothas Be, Yo Like George, Ain't that Funkin' Kinda Hard on You? That might get his attention. 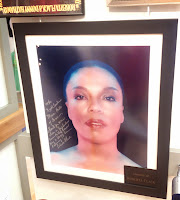 I was surprised to learn how much musical talent has come out of North Carolina -- including some of my alltime favorites like Nina Simone, Thelonious Monk, John Coltrane, Max Roach, Roberta Flack, Maceo Parker, and so many more. Who knew such splendid treasures could be found in the North Carolina History books? 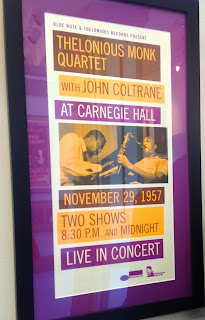 In October, the N.C. Music Hall of Fame will induct the following musicians who were either born in N.C., or have strong ties to the state: Clay Aiken, Fantasia, Jimmy Capps, The Embers, Littel Eva, Lulu Belle & Scotty, Tab Smith and Link Wray. The celebration will be held on October 16 at the Gem Theatre in Kannapolis. Cordle says she hopes Fantasia will sing during the event. Me too! If she does plan to perform, I may have to attend the festivities myself! The hall is located in the old city jail building in Kannapolis, but the founders plan to move to a portion of the new baseball stadium planned for downtown Kannapolis.

For details about the upcoming Induction ceremony and visiting hours for the N.C. Music Hall of Fame, call 704-934-2320 or send a message to info@northcarolinamusichalloffame.org.