Some Republican New York University students with too much time on their hands came up with a horrendous game that called for players to search on campus for others wearing name tags saying “illegal immigrant,” The New York Times reports today.

Luckily, more people came out to protest the game rather than to play it. Protestors carrying signs saying, “Racism Isn’t a Game” and “We Are All Immigrants” chanted and marched on a street across from the student Republicans' table on campus.

“The idea of hunting down an illegal immigrant in a game was disgusting,” Dave Hancock, a member of Students Creating Radical Change, which helped arrange the protest against the “game,” told the Times. “If they want to have an honest conversation about a very difficult topic, let’s do it. Instead, they decided to host what many of us felt was an insensitive and offensive event.”

Members of the NYU Republican group said they weren’t trying to offend, but wanted to “draw awareness to the issues,” according to the Times article.

The president of the university, John Sexton, said he was disappointed by the game, which placed “sloganeering and trivialization of thought above true debate.”

This game is eerily reminiscent of the way slaves, who would run away seeking freedom, were hunted down by slave catchers. This excerpt from a University of Southern California Web site post explains it well:

Slaves were forbidden from carrying guns, taking food, striking their masters, and running away. All slaves could be flogged or killed for resisting or breaking the slave codes. Some slave states required both slaves and free blacks to wear metal badges that were embossed with an ID number and occupation.

Refusing to obey their masters’ demands created a duel crisis on the part of the resisting slaves and their demanding owners. The most common form of resistance used by the slaves was to run away. To live as a runaway required perfect escape routes and exact timing. Where to hide, finding food, and leaving the family and children behind became primary issues for the escaping slaves. Later, the severe punishment had to be faced whenever a hunted slave was caught and returned to bondage. 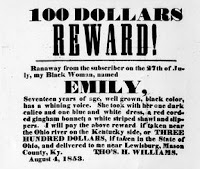 Would these NYU students have created this game if they had known the unfortunate history of this country when members of the dominant culture would hunt (then in most cases, maim and/or kill) people from other lands? I hope not.

Click here to read the entire USC article on Slavery in America.

Maybe this is worth sharing that i found in this few posts below.[url=http://www.carcoverspal.com]Car Cover[/url]