Joseph Biden: My Homie from Delaware 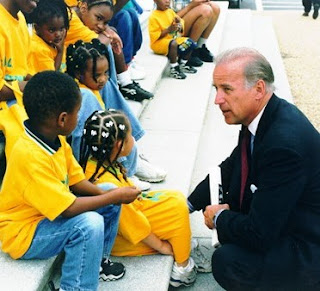 Since Senator Joseph Biden, the Democrat from Delaware, has officially launched his presidential campaign this week, I feel compelled to say just a little about my homie from the Blue Hen state.

One image that sticks in my mind about the senator is some television footage that must have been shot in the late 80s when South Africa was still openly practicing its evil apartheid system. Biden spoke on the Senate floor supporting sanctions against South Africa for its apartheid practices and passionately banged on the podium and called for chastisement of the South African evil “racist apartheid regime.” He seemed to be genuinely outraged. But that was a long time ago.

Other than that, I know the good Senator has a long and strong record as the Chairman of the Senate Foreign Relations Committee, Senate Judiciary Committee, and Chairman of the Judiciary Subcommittee on Crime and Drugs. I honestly think he’s qualified for the job of President of the United States.

But then we come to this career politician’s latest goof up. By now, we’ve all heard the unfortunate comments that Biden made about Barack Obama, another Democratic hopeful candidate.


“I mean, you got the first mainstream African-American who is articulate and bright and clean and a nice-looking guy,” he said. “I mean, that’s a storybook, man.”


I mean, you need to learn when to hush, Biden. Even Bobby Benjamin (my dad), an active Delaware Democrat and Biden supporter, says that the senator doesn’t quite know when to stop talking. “Overcoming the need to say more than is necessary will be his greatest obstacle,” Dad said. “Our senator has a need to let people know how smart he is, not realizing this turns the voter off. If he rids himself of this, he will be on his way.”

Well Dad, after the senator’s comments about Obama, I don’t think he stands a chance. People around the world seem to think that the senator has some explaining to do, so he clarified what he meant. “My mother has an expression: 'Clean as a whistle and sharp as a tack,’ Biden said in a statement today. Alright then homie, I guess that explains it.