Not only did I not know that this guy was from North Cakalacki (North Carolina) -- but I also didn't know that he helped to create the comedy show, Good Times. Born on November 3, 1949 in Salisbury, N.C., Mike Evans, known to many fans as Lionel Jefferson from the television show, The Jeffersons, co-wrote over 130 episodes of Good Times.

When his double duties as actor on one show and writer on the other proved to be too much, Mike Evans focused all of his attention on helping to mold Good Times. He was replaced by Damon Evans (no relation) for several years, until he returned to the cast of The Jeffersons in 1979. I personally preferred Mike to Damon, but both were entertaining and added their own flavor to the show.

Right Back at Ya, the One Cleopatra: Lil Kim 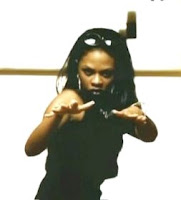 You can say what you want about Bedford-Stuyvesant's own Lil Kim (Kimberly Denise Jones), but she always manages to land on her feet. Even if I've cringed at some of the content in her songs, I've always loved her delivery – she’s consistently smooth, forceful and precise.

Evidently, a scholar up at Syracuse University saw the magic in Lil Kim’s artistry, as he has developed a whole English and Textual Studies course, which includes Kim’s music as a big part of the class. Greg Thomas, Associate Professor of Global Black Studies in the English Department at Syracuse University, who teaches the class, also wrote a book published in 2009 called, Hip-Hop Revolution in the Flesh: Power, Knowledge and Pleasure in Lil' Kims Lyrics. Thomas’ class is required to (read his book, I assume), watch Lil Kim’s music videos, and study her in-your-face, sometimes pornographic lyrics. I’d imagine class must be pretty exciting at times.
Here’s a description of the course:
Reading Nation and Empire: English and Textual Studies, Syracuse University English Department
Hip-Hop Eshu: QUEEN B@#$H Lyricism
Tues., Thurs., 3:30-4:50
Instructor: Greg Thomas

This course on lyricism is all about Hip-Hop and, necessarily, Black life in Africa’s Diaspora. It is no less about certain “gender” and “sexuality” issues at the center of contemporary Black struggles, cultural and political. Our focus will be on the lyrical texts of one phenomenal figure: Lil' Kim, “Big Momma/Queen B itch.” In place of bourgeois literature and bourgeois criticism, there will be rap audio and lyrics, oral history, musicology, folklore and spoken word, magazine articles, interviews, film and video as well as Black Studies of all kinds: Toni Morrison on the Million Woman March, Angela Y. Davis on Blues women, Carolyn Cooper and Denise Noble on Dancehall Ragga, Cheryl Keyes on female rappers, E. Franklin Frazier on the brown middle-class elite, Sonia Sanchez on Black Puritans, various scholars on Yoruba trickster-god(desse)s, Sylvia Wynter on modern sexual categories, and Ifi Amadiume on African matriarchy and pre-colonial/flexible gender systems. We'll also seriously examine recent work on state repression and “Rap COINTELPRO,” state violence not covered by corporate media. All will be critically engaged to provide ample understanding of Lil' Kim's “Queen B itch” lyricism, her sexual revolution in rhyme, her very own work in the musical revolution that is Hip-Hop.

Put Your Lighters Up, 2005
(I was impressed when Lil Kim broke out in some Spanish toward the end of the video -- check it out):

Tapping the Fierce Warrior Side

I was asked to write a response to this question:

Who is your favorite movie character and why?

Beatrix Kiddo, the main character in Quentin Tarantino’s Kill Bill series resonates deeply with me. I admire Beatrix’s strong maternal instincts and her fierce warrior side. Beatrix miraculously survived the brutality of her former mate (Bill, who tried to kill her when she was pregnant), overcame physical and emotional scars, and also successfully sought revenge on her many foes. She accomplished all of this with extreme focus, acute attention to detail, determination and discipline. In these tough days of harsh economic woes and escalating callousness, Beatrix is a fitting role model for tough-minded women all over the world. 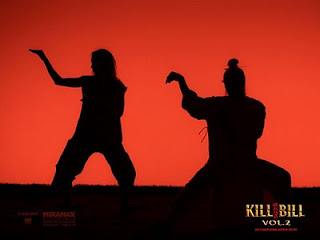 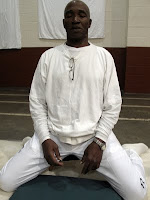 I almost pulled the car over when I heard this on NPR. What a phenomenal and powerful program. Praise God.

Deep in the Bible Belt, an ancient Eastern practice is taking root in the unlikeliest of places: Alabama's highest-security prison ...

"For the first three days, the only thing we do is sit and focus on our breath," Young says. "This is to still the mind and get the mind sharp."

"You'll start feeling little stuff moving all around on your body," Young says. "Some guys can't handle this; some guys scream."...

... It's a rude awakening for some prisoners, Vipassana teacher Carl Franz says.

"Everyone's mind is kind of a Pandora's box, and when you have 33 rather serious convicts facing their past and their own minds, their memories, their regrets, rough childhood, whatever, their crimes, lots of stuff comes up," Franz says. ...

... Dr. Ron Cavanaugh, treatment director for the Alabama Department of Corrections, says many inmates put their defenses up, denying responsibility for their crimes and blaming others. But the meditation practice, he says, chips away at those defense mechanisms.

"They have nobody to talk to," Cavanaugh says. "So there's nobody that they can deny stuff with or project everything with."

Cavanaugh says inmates who go through the course have a 20 percent reduction in disciplinary action. But it hasn't been an easy sell in Alabama, a state known for harsh punishment policies like chain gangs and hitching posts.


"The Dhamma Brothers" is a documentary that filmmaker Jenny Phillips made about the prison meditation program.
Posted by Cappuccino Soul at 2/08/2011 08:16:00 PM 1 comment: 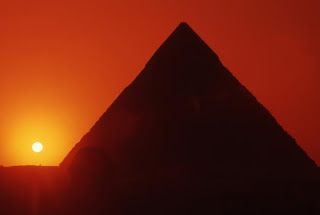 In Egypt's Name
(Ala Esm Masr)

History may say what it wishes in Egypt's name
Egypt, for me, is the most beloved and most beautiful of things.
I love her when she owns the earth, east and west.
And I love her when she is down, wounded in a battle.
I love her fiercely, gently and with modesty.
I hate her and curse her with the passion of the lovesick.
I leave her and flee down one path, and she remains in another.
She turns to find me beside her in misfortune.
My veins pulsating with a thousand tunes and rhythms.
In Egypt's name.

My daughter asked me what I was going to dream about as she was listening to the rain fall outside our window. The rain used to alarm her, but now she says it’s soothing.

“I always decide what I’m going to dream about -- I never let my mind decide,” she said.

“You know, that’s really powerful,” I told her. And it is – I think I’ll try that next time. 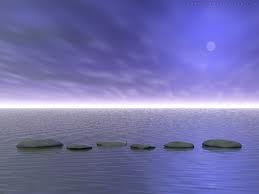