I am a Promise: The Children of Stanton Elementary School 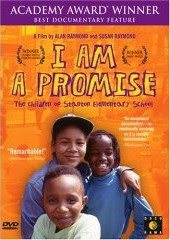 If you are concerned at all about the decline of public school education in America, you’ll want to see the documentary I am a Promise: The Children of Stanton Elementary School. But beware. You’ll feel great sadness as you guess that many of these radiant children in North Philadelphia will not graduate from high school—not because they can’t do the work—but because the madness and trauma of their everyday lives will prevent them.

The film, which won an Academy Award in 1994, features M. Hall Stanton Elementary School students and principal Deana Burney. Shot in the early 1990s, I am a Promise, a film that is still sadly relevant today, vividly shows Stanton’s gritty and crowded neighborhood. Abundant trash and boarded up homes decorate the area and sloppy graffiti is painted everywhere. This was the last phase of the tragic crack epidemic and lots of people are aimlessly walking the streets and hanging out on the corners.

I am a Promise is alarmingly relevant today and poignantly points to the obstacles that many children in America must face to get a quality education.

I understand. I think this can be helpful to you. Go to: http://www.panix.com/~pro-ed/

If you get it, [it is in many libraries, so you don't have to buy it] email me and I can help more.
Best regards,

Thanks for the information professor. I'm sure there are some school teachers out there who need help with preventing classroom discipline problems.