In Erykah Badu’s provocative music video for her song “Window Seat,” Badu gets raw for her fans -- literally.

In the video, Badu drives a car along the same route as President John F. Kennedy, just before he was assassinated 47 years ago in Dallas. She then walks down the route that Kennedy’s car travelled, along Dealey Plaza, while shedding her clothes. When she arrives at the spot where Kennedy was shot on the grassy knoll, she’s totally naked. We hear a shot and Badu falls to the ground.

OK, this is all very shocking and has caught the attention of the media, fans, and onlookers, but what’s the singer's point?

Badu told the Dallas Morning News this week that the video is a “protest” and about freeing yourself.  The song Window Seat “is about liberating yourself from layers and layers of skin or demons that are a hindrance to your growth or freedom, or evolution,” she told the paper. “I wanted to do something that said just that, so I started to think about shedding, nudity, taking things off in a very artful way,” she said.

But the lyrics to the song don’t seem to support her claim. Here’s a sample:


Am I missing something?

I noticed that “Erykah Badu” is listed as one of the “Hot Topics” on the Web site for The Dallas Morning News. Could this have been the point of her stunt?

My guess is -- yes. Didn’t she want to call attention to her new album, to sell more records, to get more people talking about her, to exhibit her body?

This statement below by London’s xiamoogle, which appeared in the comment section of The Guardian’s blog post today about Badu’s performance art, comments on the video briskly:

How is it that female musicians have to be controver-shawl to gain fans/respect/fame? And why must they have to get naked in order to be controversial? Maybe she'll get a billion views too and be projected into the mainstream? … I expected better from Badu.

Although I’m not a big Badu fan (she seems to whine a bit when she sings and she’s often off key), I’ve always respected that her attention seemed not to be on overt sexuality. She seemed to have something more substantial to say. I don’t remember her wearing extremely revealing clothes or gyrating her hips, like so many modern performers do to sell their wares.

But with this video strip act, Badu busts the typical move. She shows her body to get attention -- to sell something.

It’s a shame and too bad that she couldn’t have focused all this attention on a cause that was really worthwhile – like, for instance, the documentary about the mass rape of women and children in the war-torn Democratic Republic of Congo.

The World's Most Dangerous Place for Women, a film narrated by Thandie Newton, follows a London woman who grew up in that city, but was born thousands of miles away in the Democratic Republic of Congo. Judtih Wanga was sent away by her parents to live in Britain when she was three, she returns to Congo to meet them for the first time.

When Wanga arrives in her homeland, she comes face to face with the brutality of this country.

Every day, at least one woman is assaulted in Congo –- not only her character, but her body. This is the perfect kind of injustice to highlight with performance art. Take a wrong and reveal its cruelty and absurdity with metaphor — poetry — action.

Badu missed a prime opportunity to really say something about so many issues -- physically and mentally abused women, poverty, lack of healthcare for the poor, war, the people of Haiti -- the list is endless. Instead, we’re all left looking at her.

I had no idea that Bre-Z from "Empire" is from Wilmington, Delaware -- my homie! (Click on the text below to read the article). 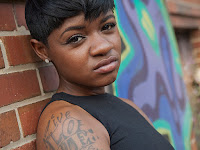 Bre-Z didn’t come from the ghetto. She doesn’t have a violent past. But that didn’t stop the Philadelphia-by-way-of-Wilmington native from relating wholeheartedly to her new, eye-catching Empire character Freda Gatz, who catches the ear of Empire Records head Lucious Lyon (Terrence Howard). Freda is a brash, butch battle rapper from Brooklyn’s dangerous Brownsville neighborhood, the daughter of the rose-delivering OG Frank Gatz, played by Chris Rock. With the cockiness of the offspring of an infamous gangster, Freda’s no BS attitude reflects her confidence in her music and her status on the streets. Her debut on the first episode of Empire’s second season sent waves through social media when viewers watched a petite, baby-faced girl rap with a deep, raspy, androgynous voice.
Posted by Cappuccino Soul at 11/11/2015 01:24:00 PM 4 comments: