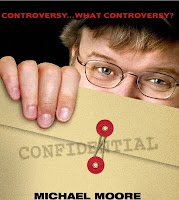 I saw Michael Moore's latest addition to his opus on how America is swiftly going down the drain today and was far more affected by this film than I thought I'd be.

I've read reviews by more than one writer who admit that Moore makes some good points with Capitalism: A Love Story:

* The majority of banking systems in the U.S. are corrupt
* Workers are underpaid and used like tokens
* The rich make a concentrated effort to keep the poor right where they want them (us) -- poor
* Many of our representatives are selfish and corrupt
* There's more but I won't go on

But the reviewers also say, "What's he want us to do about it?" Well, it's obvious that the man wants us to get up off our butts and DO SOMETHING. I'm sure Moore is saying to us all, "Be creative!" Write to your Congressional representatives and tell them what you want, protest in the streets, demand that the banks give loans to people want to create viable small businesses and buy affordable homes, demand universal healthcare for the country's citizens, etc.

He certainly made me want to change our dire circumstances. Moore's Love Story really makes me want to get more active and vocal. I'm sure it will have the same effect on you once you see this masterpiece.

One portion of the film that keeps ringing in my head is a chant that some people in Miami sang when they banded together to help a family re-enter a home that they were thrown out of for not being able to pay the mortgage. The home had been foreclosed and the family, which included several children, were living in an old truck in their neighborhood. Some of the neighbors decided to help the family by forcing open the locked doors and taking down the boards on the windows, so that the displaced clan could reclaim the house. When the officials, including police officers, came to remove the family from their home, the good folks told the officials that they weren't going anywhere. In addition to telling them how unfair their ousting was, the family, their neighbors, and other supporters, shouted over and over: "Ain't no party like a people power party, cause a people power party don't stop!"

Here's what Michael Moore has to say about his film:

"It's a crime story. But it's also a war story about class warfare. And a vampire movie, with the upper 1 percent feeding off the rest of us. And, of course, it's also a love story. Only it's about an abusive relationship.

"It's not about an individual, like Roger Smith, or a corporation, or even an issue, like health care. This is the big enchilada. This is about the thing that dominates all our lives — the economy. I made this movie as if it was going to be the last movie I was allowed to make.

Check out the trailer for the movie below, then go see the film today!

Haven't got to see it ywt but can't wait. I hope they give our President a private screening to encourage him not to compremise any more and stand his ground. We the people need help!

MaDear,
Run and go see it! You're right. Obama NEEDS to see this one and learn a few things. Like, we need our public option, the PEOPLE need a bailout, and bring the troops home!
Alicia