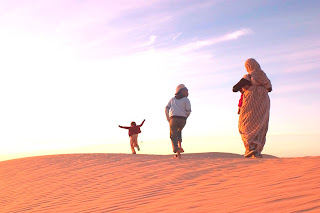 Editor's note: The broadcast of Stolen was initially scheduled for Feb. 5, but was pushed back to Feb. 26 because lobbyists on behalf of the Algerian government and the Polisario Liberation Front tried to stop the showing of the film on World Channel, according to Violeta Ayala, one of Stolen's directors.

“Why isn’t somebody doing something about this?” This is the question you’ll ask yourself as you watch this film about modern day slavery in Western Sahara.

Let’s come back to that.

When directors Violeta Ayala and Daniel Fallshaw started shooting Stolen, a documentary about people reuniting with their families in the Saharawi refugee camps in Western Sahara, they were dumbfounded to discover modern day slavery practices in the region.

While filming the story of Fetim Sellami’s reunion with her mother Embarka, who Fetim hadn’t seen in 30 years, the directors discovered that Fetim and thousands of other black residents of the refugee camps, controlled by the Polisario Liberation Front, were serving as slaves to some of the white Arab camp residents.

During the year of filming, Ayala and Fallshaw noticed that Fetim’s relationship with Deido, the woman she and her children referred to as their “white grandmother,” was subservient. “We noticed Fetim was doing the domestic work for both her's and Deido's house,” Ayala said.

The story that unfolds is a long history of black Africans working as slaves for white Arabs in Western Sahara. The revelation of the intricacies of the kidnapping, selling, lies, and deception seems to warm up on the screen like a slow simmering pot of stew.  Along with the directors, we slowly see the story of one group of people dominating and controlling another. Of course in 2009, when the film was shot, this seems implausible and unbelievable, if it were not for the actual people working as slaves telling their own stories.

What’s also disconcerting about this tale, is that it is told against the backdrop of the beautiful Western Sahara desert. The silhouettes and colors of the desert and the elegant people don’t seem to mesh with the sordid tale of modern day slavery that neither the United Nations, Polisario Liberation Front, nor the other affected countries, want to admit is happening.

What’s noteworthy about Stolen is the subtle concealment of the injustice that apparently still exists today in parts of Mauritania, Algeria, Morocco, Mali, and Senegal. No organization or country wants to take a stand and intervene in the mess, which a UN representative refers to only as “a cultural issue that is existing.” (Whatever that means.)

Fetim’s friends and relatives also discuss another ugly aspect of this slavery practice – the male slave owners use the female slaves in any way they want. We learn that Embarka was a slave to Deido’s father, who forced Embarka into a sexual relationship and as a result, Embarka had a child by this man.

Some of the black Africans featured in the film use stark language to describe some of the atrocities that occur in this oppressive system: “When a white man wants a black woman, he doesn’t marry her. No! When he wants her, he f---s her,” says one of Fetim’s friends.

When Deido’s father died, Embarka’s daughter Fetim was forced to work as a slave for Deido, who took Fetim to live in the Western Sahara refugee camps. Now Fetim’s children are looking at a life of servitude, unless someone can stop the vicious cycle.

One of Fetim’s cousins makes one of the most profound statements in the film when he says, “Slavery man-to-man is the saddest thing in the world and it still exists here!”

Sadly, it seems that Fetim is helpless and has no context in which to put her story. As Ayala looks at Fetim with compassion, she is visibly taken aback by Fetim’s question, “In America, aren’t there slave families?” Fetim has been so repressed that she literally does not know what time it is.

At the end of the film, Fetim’s daughter writes a message in the beautiful warm and golden sun-bathed desert sand: “We want freedom and peace.” Surely, that’s not too much to ask.

And so again, why isn’t somebody doing something about this?

Stolen has been presented at 60 festivals worldwide, and has won 12 awards, including  Best Feature Documentary Prize at the 2010 Pan African Film and Arts Festival in Los Angeles and will be televised on the WORLD Channel's AfroPop series, Tuesday, Feb. 26. World Channel programming is produced and distributed by PBS affiliates in Boston and New York.

Read about how the directors had to hide their tapes and flee the refugee camps because of threats to their lives and the preservation of their footage.