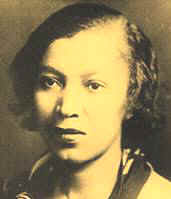 Presently I’m reading a Zora Neale Hurston biography called Wrapped in Rainbows by Valerie Boyd. It’s an amazing retelling of Hurston’s life, starting with her birth in Alabama and her colorful and dramatic life with her family in Eatonville, Florida.

Boyd depicts Zora, born January 7, 1891, as a spunky, inquisitive, imaginative and playful character. Her life was beset with great tragedy when she reached adolescence—her mother died and her dad remarried in a hurry. She was virtually kicked out of the family house and had to fend for herself shortly after that.

I haven’t finished the book yet, but I’ve read enough to know that Hurston was a great lover of African-American history and culture. She reveled in the folktales, magical practices, and dialect of black southern life. Her love for her people led her to study anthropology at Columbia University’s Barnard College while she continued to study literature at the same school.

Hurston wrote several short stories and essays for magazines such as the NAACP’s Crisis magazine, the Urban League’s Opportunity: A Journal of Negro Life, and a few literary journals. In a 1925 essay in The Messenger, Hurston criticized some Howard University students who had protested singing Negro Spirituals for the school’s white president. This was evidently a ritual that was performed each year. In Wrapped in Rainbows, Boyd wrote that the students “denounced the down home spirituals for their poor grammar, and they pointed out that spirituals were not sung in white universities.” But Zora defended the practice and remembered her participation in the singing events with pride. She defended the songs as “authentic and valuable expressions of black folk culture,” Boyd wrote.

Decades after Zora published her defensive essay on the practice of singing Negro Spirituals at Howard University, students at Howard High School in Chattanooga were gleefully keeping the tradition alive. They began singing the songs when they gathered at the home of Howard’s music teacher, Edmonia Johnson Simmons. By 1974 the singing group had formed a group now known as the Chattanooga Choral Society for the Preservation of African American Song.

Two of my favorite famous Negro Spirituals are “Swing Low Sweet Chariot” and “Sometimes I Feel Like a Motherless Child.”

Check out a detailed chronology of events in Zora Neale Hurston’s life at ChickenBones: A Journal. This remarkable literary figure and lover of African-American culture died on January 28, 1960.
Posted by Cappuccino Soul at 1/08/2007 02:59:00 PM

When I first saw Eatonville Florida is was in 1970 and almost still like it may have been when Miss Hurston last saw it. Its not so much like that now. I remember in my earlier years of trucking the area around Eatonville was still farmland-now all of the consumption of near by Orlando has taken the farms and put huge houses there that dwell so many people who sadly have no idea of the world Miss Hurston lived in and wrote about. I recall great nights I have had in a juke near there-not too real far,down the road-46-in Geneva...but our trucks would be back in Eatonville. There's this great aura in the spirit of the southern black people-I always loved being along on these different adventures,always able to visualize Zora N Hurstons characters when I am with the friends I've made through these years.
Nice blog.

Thanks for commenting. Eatonville does indeed seem magical. I'm hoping to go to the Zora Neale Hurston Festival in Florida one of these days. Her gifts and magic are still with us. What a powerful force.

Their Eyes Were Watching God is on my top ten list. A very good read.
As the holder of an English degree I took a class on African-American literature in college and I would have to say that TEWWG stood out, but then again, we didn't read a bad book in that class.:-)

Sara,
Thanks for commenting. Yes, Their Eyes Were Watching God is a masterpiece. Zora Neale Hurston didn't have to write another thing after she wrote this book because it was as close to perfect as most books that I've read. The book just sings to you as you read it.
Alicia

Hi there,
I just ran across your blog. I'm Valerie Boyd, author of Wrapped in Rainbows. I'm glad you're enjoying reading about Zora's remarkable life. I really like your blog and will check it out regularly--even when you're not talking about Zora.....

Ms. Boyd,
My goodness! I am very surprised that you've found my little blog, but I'm elated that you did. Let me take this opportunity to say that I LOVE Wrapped in Rainbows. I'm only a quarter of the way through and I have to tell you that your take on Ms. Hurston's life is inspiring. Thank you for writing this gift to readers and thanks for keeping the spirit of Zora Neale Hurston alive. Thank you also for planning to visit my blog in the future.
With much respect,
Alicia

Hi Alicia,
I am so glad that you're loving Rainbows and loving Zora. The great New Orleans writer and activist Kalamu Ya Salaam posted a note about your blog on his listserve, e-drum, which has hundreds of members. That's how I heard about your blog. You're doing a great job with it, and I appreciate your good words about Wrapped in Rainbows.

Valerie,
Thanks for the compliment. I'm working hard to keep up my energy and passion for the blog. I feel that if I post those things that I'm inspired by and drawn to then others will come to the blog and also be inspired.

I am a member of Kalamu's e-drum. Where would we be without brother Kalamu? He's a powerful spirit and nurturer of us artists.

I'm well into Wrapped in Rainbows now. Your book is giving me great ideas left and right.
Peace and blessings,
alicia