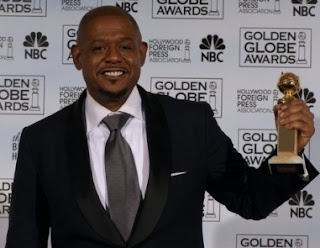 I watched the whole Golden Globe Awards show last night and I was happy about a lot of what took place. Here, I’ll discuss three wins that were inspiring.

If you’ve been following this blog, then you know that I’m very glad that one of my favorite actors, Forest Whitaker, won the award for best actor in a drama for The Last King of Scotland. I’m jealous about the ending line of his acceptance speech though. It’s one that I would give if I were ever to win an award. He said, “I want to thank God and the ancestors that let me stand on their shoulders every day and guide me, whispering in my ear. Thank you.” No, Forest. Thank you for your hard work and dedication to your craft. Keep on doin’ it brother!

America Ferrera won for her performance in the television series Ugly Betty on ABC. I’ve never seen the show, but after hearing Ferrera’s acceptance speech, I think I’ll check it out this week. “Thank you for recognizing a character who is truly bringing a new face to television,” Ferrera said at the podium. She also said the show is bringing a message to young girls that they are “worthy and lovable.” Lord knows millions of girls with that nonwhite, slightly round, eccentric look, need this type of image to identify with. Ferrera also gave a brave performance in the Independent film Real Women Have Curves in 2002.

Another pleasing moment happened at the award show when Grey’s Anatomy’s creator and executive producer, Shonda Rhimes, accepted the award for that show’s team.

Grey's Anatomy won the award for Best Television Series (Drama). Rhimes, who also wrote HBO’s Introducing Dororthy Dandridge, is a much-needed executive in Hollywood. I hope more African-Americans will take her lead and write, direct, and produce more television shows and films. This is the only way to change a long history of incorrect and shoddy representation of African-Americans on screen.

The Academy Award nominations are to be announced on Jan. 23, with the awards given on Feb. 25. Forest Whitaker should definitely be one of the nominees in the Best Actor in a Leading Role category.

I had every intention to watch the Golden Globe awards last night. Unfortunately, dinner and 3 babies to bathe and prepare for next days journey quickly through a monkey wrench into my plans.
I do want to BIG UP Forest Whittaker right along with you though my sistah. Not many actors/actresses/entertainers (if any up until now) keep it real and give the props and respect where it truly belongs. Few have the innerstanding, wisdom, and third eyesight to know where the support, guidance, and direction come from. Go Head Forest!!!!!!!
In regards to Ugly Betty. This is definitely a must watch show. I am soooooo hooked. It is funny and inspiring. What a great combination!!!!!
What about Dream Girls? Did any of the cast members take an award home?
Well, thanks for sharing. Keep'em coming.

Hey Quintella!
Yes, big UPS to Forest. I hope he's nominated for the Oscar too and takes home that prize.
I didn't mention Dreamgirls, but I was happy that Jennifer Hudson won an award for best supporting actress and crazy Eddie Murphy won an award for best supporting actor. Quite frankly, I'm surprised he's never won a golden globe before now. I was thrilled for Ms. Hudson. She really brought a lump to my throat when she sang "And I'm Telling You." She's a great talent.
Peace sister,
Alicia
(kiss your babies for me)

Just a heads-up that Last King of Scotland is playing at the Green Hills Cinema now. I don't know how long it will be there.

nm,
Thanks for the tip! Another reader told me that it was here also. I've got to RUSH to see it. Like you said, no one knows how long it will run.
Peace,
alicia