Why I Write: The Twin Poets at RiverRun Film Festival 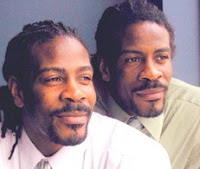 "I write for lil girls who must double dutch near bloodstains." -- from poem, Why I Write

Making Delaware proud are spoken word poets and community leaders, Al Mills and Nnamdi Chukwuocha, aka, The Twin Poets. Filmmaker Sharon Baker with Hearts and Minds Film thought enough of the twins' performance and community leadership talent to capture their story on film with Why I Write: The Twin Poets, a 60 minute documentary which will be featured at the RiverRun International Film Festival in April.

HBO's Def Poetry Jam featured The Twin Poets several years ago, as they presented probably their most well known piece, "Dreams Are Illegal in the Ghetto."

Presented as part of the festival's With Class series, Why I Write, chronicles the travels of Mills and Chukwuocha in their hometown neighborhoods in Wilmington, Del., including the Riverside Housing Projects, a symbol of some of the city's most decayed and troubled areas. The film shows the twins conducting poetry workhops with young people and encouraging them to use words on paper and in performance to overcome struggles, express and discover themselves, their talents, and dreams.

Why I Write must be a rarity in that it highlights the high crime rate and other sociological ills that are prevalent in parts of Wilmington that serve the drug traffic that flows heavily up and down the Mid-Atlantic corridor.

The RiverRun Film Festival will show Why I Write on April 20, 7 p.m. at the Hanesbrands Theatre, 209 North Spruce Street. Admission is free. The festival runs April 13-21 in Winston-Salem.

Whoa! Nice poem and flow. Poetry is an art that's close to my heart. And that was really inspiring

Yes, The Twin Poets are great. And may I add, they're from my hometown. :-)
They've definitely got some inspiring words for the young people.
Thanks for commenting!

AWESOME, I REALLY THOUGHT THEY WERE TWINS. GOD IS TRUELY AN AWESOME GOD TO BRING THESE TWO MINDS TOGETHER FOR THE WORLD.