For Black Boys Who Have Considered Homicide....

For all the men and boys out there who are sulking because they don't like the way black men are portrayed in the new film "For Colored Girls," -- relax. There's something out there for you too. It's a play by Keith Antar Mason, based on Ntozake Shange's powerhouse drama "For Colored Girls Who Have Considered Suicide When the Rainbow Is Enuf," and it's called "For Black Boys Who Have Considered Homicide When the Streets Were Too Much."

It's raw, poetic, and speaks to you like you probably want it to. I've directed excerpts from the play and I've seen black men respond to it viscerally. I took some actors to perform the excerpts in places like a prison (in Wilmington, Del.), a reform school for boys (in Wilmington, Del.), and a college campus in Philadelphia. One guy, a fellow African-American directing student, said to me after seeing the performance: "Now that's what I'm talkin' about family!" I took that as a compliment. Two other young men from my old neighborhood just simply nodded their heads up and down, said "yes" and "We wanna see more!"

So, hang your heads no more gentleman. Find a copy of Mason's play and bask in the understanding. Here's a partial monologue from the drama to tide you over: 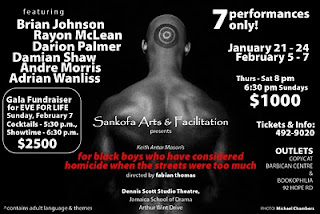 you have done my play and did not contact to gain permission to do it I am a living playwright and this is how i make my living...i am honored that you have done my work but i wish i had been paid for my efforts in this age of hip-hop i am not some blues singer to be ripped off...
thank you for your effort in presenting my work find me and pay me...ask at hayti but i am in stl
right now

please contact me about my play for black boys who have considered homicide when the streets were too much i am a living playwright and this is how i make my living i honored that you have done my work but i would love to get paid in this hip-hop age the blues singer era is done...find me in stl right now...thanks for doing my work

Mr. Mason,
I understand wholeheartedly what you're saying. Since I only used very few excerpts and charged nothing for the groups that I presented it to -- prisoners, juveniles in a boys home and young people in a youth program -- I didn't think I needed to. This was over 15 years ago also. I'm so very sorry that I've offended you. I love your work and thought these groups would benefit from it.

I am planning on putting on your work this Spring at Harvard and we are in the process of procuring rights. Where is your contact information? You are not an easy man to find.

Director,
If you'll send me your contact info., I can tell you how to contact Mr. Mason regarding your project.
Peace,
Alicia
aliciamichelebenjamin@gmail.com