Ernie Barnes: After the Dance

"We don't see each other. We are blind to each other's humanity."
-- Ernie Barnes 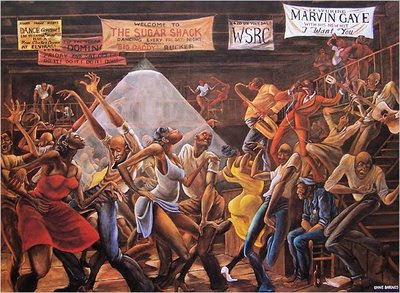 My friend Lisa sent me the New York Times article today about the passing of the great and prolific artist Ernie Barnes, a son of North Carolina. Of course I had heard about the death of this artistic genius on NPR, but hadn't read any articles or stories yet because I guess I didn't want to accept it.

When I see the "Sugar Shack" painting (shown above), of course I think of Marvin Gaye's "I Want You" recording, since the work was featured on the cover of that astounding piece of music (my favorite of Marvin Gaye's work). And we all know that "Sugar Shack" was featured in the opening credits of the sitcom "Good Times." (Barnes' work would also periodically pop up on "Good Times," as it was used to represent the artistry of J.J., a character on the show who was not only a clown but a supposed gifted artist.)

"A model of energy and vitality, the [Sugar Shack] reveals a vigorous fusion of music and dance, underscoring the dynamism of the entire hall," Paul Von Blum wrote in his 1996 essay, Advancing the Figurative Tradition.

"The frenetic activity encourages a release of the accumulated tensions of the week or month. Signs informing patrons of a live Marvin Gaye appearance and other events indicate a well-established locale to escape the pressures of daily life," Blum wrote.

You can't tell me that Barnes has not influenced a host of American artists. If you look at the movement, style, colors, and emotion of his work, you can see the echoes of his art in countless African-American painters.

Barnes, who began drawing as a child, seemed to have turned to art as therapy from feelings of isolation. Growing up in Durham, N.C. he was overweight and shy. One of his junior high school teachers found him drawing in a notebook as he hid away from harassing bullies. He was encouraged to lift weights and eventually turned to sports as an escape. Barnes went on to play professional football as an offensive lineman in the old American Football League. He played in the 1960s for the New York Titans, the San Diego Chargers and the Denver Broncos. But art won out over football, and Barnes permanently left the football fields for the canvasses that he so magically brought to life.

Here's an excerpt from the New York Times, April 30:

“One day on the playing field I looked up and the sun was breaking through the clouds, hitting the unmuddied areas on the uniforms, and I said, ‘That’s beautiful!’ ” he wrote on a Web site devoted to his work, sundaysgladiators.com. “I knew then that it was all over being a player. I was more interested in art. So I traded my cleats for canvas, my bruises for brushes, and put all the violence and power I’d felt on the field into my paintings.”


Although I'm very saddened by his death, I know Barnes' work will continue to inspire and influence budding artists for years to come.

Barnes said he paints his subjects with their eyes slightly closed because he believes, "We don't see each other." He said, "We are blind to each other's humanity." Although I love Barnes' work -- some of it is so moving and striking that it makes me stop and take in an extra breath -- I hope he's not totally right about us not recognizing the humanity in humans. I hope there are times when we can, indeed, really see each other.

Hi Alicia, as always, great post. Thanks for the memoriam for Ernie. I have so many of his pieces and their movement and power and softness deeply embedded in my mind's slideshow and his passing reminds to to take another look and be thankful for the humanity of all those who blodly jumped off the smooth higway to traverse the oft times singular and bumpy path toward fulfillment of purpose. Ernie knew what that was about. I saw him on pbs a couple of months ago-a doc about him-and all I can say is that I'm glad his soul's journey brought him into our collective season and that he dared to share his passion and gift with us all. Thanks again, Alicia... I'll pass it on. Thx, Dawn

Dawn,
I tried to express my thoughts and feelings in this post about Ernie Barnes. His work means a great deal to me.
As I said, he has definitely influenced a great deal of artists and I know others will discover him along the way.
How many of his works do you have? Man! I've found a couple of things by Jonathan Green in thrift stores (can you believe it?), but I've never run across anything by Mr. Barnes. Maybe now my travels will lead me in the right direction.
Peace,
Alicia

Thanks for the writeup.

Wow! Alicia, Thank you for sharing this story, through a multi-media of diverse facets. The picture is a bit provacative, but I remember seeing this particular picture when they would show it on the T.V. sitcom "Good Times".
I also remember the artist because of his unique way of painting his characters. Thank you Ernie Barnes for your contributions.

But I can't help but feel a sermon, a message or lesson coming on. That quote from Mr. Barnes "We don't see each other. We are blind to each other's humanity." echoes within me and shouts what my Pastor(Pastor Donald Bell, Sr., (Covenant Blessing Fellowship) has been teaching on: "Covenant Relationships" - (Matthew 16:1-16) see a recap below:

Understanding the nature of relationship in God – “COVENANT RELATIONSHIPS” - It is in relationships that God builds, God never builds through individualism. So we need to learn to relate to one another. We are establishong a foundatiion for relating.

Understanding the nature of the “CHURCH” - Out of that foundation for relating we began in preparation in ministry, so when we are talking about the church, we are talking about now what do we do with those relationships, we have the relationships but what are the advantages, what should be taking place,what should be the measureable outcome of our relating; That's the ministry,and that's the church. So we learn how to do relationships, and we learn how to handle each other.

Understanding "Kingdom Principles" - Now once we’ve come together in the building and the establishment of relationship, we move into Kingdom Principles, which is the deployment based on the preparation we received because we were open to relationships that made us accountable and sharpened us as iron sharpens iron.

Bottom line, WE need to stay connected, engaged and accountable to God and to each other. That everything God does, all of God's Promises, all of God's Blessings or Curses are done through Covenant Relationships. Amen!!!

Ernie Barnes was truly a genius. There's no other way to put it.

I love all that you say and yes, let's thank Ernie Barnes for his lifetime of artistry that he has shared with us over the years. His work so eloquently and beautifully describes our experience as African Americans, as ghetto dwellers, as human beings.

I like what your pastor says, "WE need to stay connected, engaged and accountable to God and to each other." This is true for ALL relationships. This very thought, belief, wise teaching, has saved my life.

You can fill the movement in his work.

Madear,
You most definitely can! That's the first thing I ever noticed about his work. And it's so elegant. Thanks for commenting!
Love,
Alicia