Taking a Little Trip to the Moon 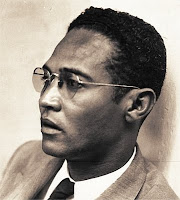 April is National Poetry Month so I've decided to introduce some of my students to the poets of their native countries. This has also been an opportunity for me to explore some of the world poetry that I'm not familiar with. Haitian poet, Félix Morisseau-Leroy, was a great find in the mix. Morisseau is credited with getting Creole recognized as one of Haiti's official languages.

One of my Haitian students W is very bright and scored 100 on one of the comprehension tests that we gave her, but she has been very timid about speaking in English. I thought maybe the poetic language of one of her homegrown poets would help to loosen her up a bit. W read the poem below by Morisseau beautifully! I wish I could have recorded it. I've actually been dreaming of directing a show that features works in English and other languages, read or performed by people whose first language is not English. Having my students read and speak these words from poets across the world has inspired me to get going on the project.

I'm taking a little trip to the moon
I've had it with life down here
Around here everything's sure hard
I'm on my way to the moon
They tell me up there there's no such thing
As good and bad people
There's no stupid guys or wise guys
No city or mountain people
All people are people on the moon
All people speak one language
I can't hack it on earth anymore
Civilization's exhausting me
Civilization's scaring me
Wherever I turn I see
People killing people
Civilization was finished a long time age
People there have forgotten that awful time
I'm taking a little trip to the moon
They tell me there's no king there
No county sheriff
No justice of the peace
No bailiff
No monseignor
I just gotta make that voyage to the moon
They tell me it's beautiful there, just beautiful
Nights are clearer than daytime
There's no time for a guy to sleep
No days for work or for play
Nights you watch the earth aglow
Brighter than the sun
And stars as close as fireflies on trees
There's no heat
No cold
No misery
No mud
Everyone's forgotten about war
Forgotten about civilization
The way the old forget colic
Measles and teething
I'm gonna live on the moon
Evenings I'll tell the kids stories
I'll tell them that the whole time the earth turns
There's a huge woman
An immense female werewolf
They call civilization
Crushing young men like ants.

Félix Morisseau-Leroy (also known as Feliks Moriso-Lewa) was born on March 13, 1912. He was a Haitian writer who wrote poetry and plays in Haitian Créole, the first significant writer to do so. By 1961 he succeeded in having Créole recognized as an official language of Haiti, after expanding its teaching in schools and use in creative literature. Morisseau also published works about Haitian Créole and Haitian French literature. He worked internationally, encouraging the development of national literature in post-colonial Ghana and Senegal. In 1981 he settled in Miami, Florida, where he was influential in uniting the Haitian community around Créole and encouraged its study in academia. He died on September 5, 1998.
Posted by Cappuccino Soul at 4/15/2009 02:08:00 PM

I like that reference to old people forgetting Measles, and stuff.

That is good...I love the rhythm of the piece. Doesn't it remind you of something by The Last Poets?

Yeah, take it on over to the Nuyorican and see how it sounds.
:-)

Just had to return to this poem. That female werewolf. Wow.

No, I mean give full credit. People do that all the time. You'd just be performing it.
When you do -- tape it and post it somewhere, OK?
lol

it's areally pleasure to read my grand father Here. it's a good initiative to open young mind to the old poet. Poetry is not just an exercise of style and form is also an emotional expression.
The aesthetic and ethic ...
(soory for my english i 'm frenchy lol)

And oh so glad that I found the poetry of your grandfather. What a great and profound man he was!

Do you also write poetry? If so, I'd love to read some of it. Just point me in the right direction.

Also, if there's a poem by your grandfather that you think I and my readers would enjoy, please send it to me!

All the pleasure is for me,
i apreciate your initiative.
yes i'm a writer too like my grand father. i'm writer, spoken words performer .... i write poetry an Novel but in french .. i try too translate it in english ...
do you understand french..??
HOwever, i think i have something for you and your student ... reply me on: Manalone@gmail.com (Manalone is my poetry alias.).

god bless you and your daughter ...
Albert Morisseau Leroy

Thanks for commenting and for your well wishes.

I'm sure my students would love anything that you would like to share with them. Feel free to send your info. via this e-mail address: Ramalicia@aol.com

Unfortunately, I don't understand much French. But if you send a French poem or two, I could get one of my French speaking students to translate!

If you need my mailing address, just let me know!

Thanks again and God be with you.