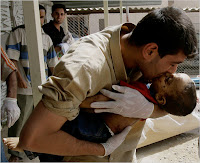 Here’s an unbearable “Picture of the Day” from today’s New York Times. Here we see a man kissing the body of his two-year-old son, Akeel Faisal Ghazi, who was killed in a bombing in the Huriya district of Baghdad. The Times reported that at least 51 people were killed and 75 were wounded in the bombing late yesterday afternoon, Iraqi security officials said. The Times further reports that:

There were immediate and angry calls for revenge from Shiites, a display of sectarian tensions that had been ebbing as the overall violence dropped in Iraq. The blast occurred in the heart of a neighborhood where Sunnis had been brutally driven out — and some of the current residents blamed the displaced Sunnis for the attack.
In their rage, others faulted the new pro-American neighborhood patrols, brought in from outside the area, for not preventing the attack. It was the deadliest bombing in Baghdad in more than three months.