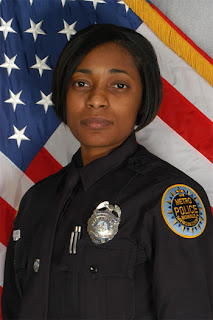 I don’t know much about the Tennessee Titans because I haven’t followed professional football in years. Even if I were to watch a game, it would be one involving the Philadelphia Eagles, my former favorite team and the team my Dad pulls for every week.

But I have been hearing a lot about the troubles of Titans player Adam “Pacman” Jones. I haven’t focused much on the news about Pacman’s run-ins with the law, but when I found out that Jones jumped at the chance to visit Danita Marsh, a Nashville police officer who was severely wounded on duty in late October, I took a look at some of the press clips on Jones. It seems “Pacman” has had some bad luck with the law, including charges of disorderly conduct, misdemeanor assault, and public intoxication. What a shame that this 23-year-old with such a shining chance to establish a great football career is finding it hard to behave himself.

Maybe his visit with Marsh is a sign that he’s going to try to turn things around. The Tennessean reported last week that Metro Police Commander Louise Kelton was in Marsh’s hospital room when Jones visited. The newspaper also reported that Jones spent over two hours with Marsh.

“He pulled a chair next to Danita’s bed and they had a conversation like they had been friends for years,” Kelton told The Tennessean. “They had this down-home conversation about food, likes, dislikes. They had some laughs. It really meant a lot to her.”

Hopefully, like Jones, others will want to extend warmth and help to Marsh who is paralyzed from the waist down. The officer was shot when she responded to a call from a domestic violence victim. The victim’s boyfriend, Willie Lee Lindsley, shot Marsh several times in the upper body and in the hip.

Funds in Marsh’s name have been established for those who want to support Marsh and her 9-year-old son. Checks payable to the Danita Marsh Fund can be mailed to any Citizens Bank in Nashville. Checks may also be sent to the MPD Community Credit Union, 306 Gay Street, Suite 105, Nashville, TN, 37201 and The Hundred Club of Nashville, P.O. Box 190428, Nashville, TN, 37219.