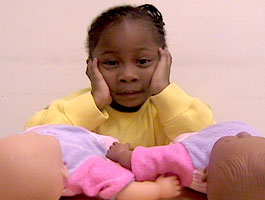 A teenage filmmaker from Manhattan, Kiri Davis, decided to make a film called A Girl Like Me, that reflected the concerns of today’s black girls, so she pointed her camera at some friends at her own high school in Manhattan to explore their perceptions of beauty and self-image.

Davis thought a replication of Dr. Kenneth Clark’s infamous “doll test” would shed some light on how black girls perceive themselves and how the dominant culture’s standard of beauty affects them.

As early as 1939, Dr. Clark and his wife, Dr. Mamie Phipps Clark, began conducting “doll tests” to try to understand how black children saw themselves. This test was used in the landmark 1954 Brown vs. Board of Education case. Black and white children across the U.S. were shown black dolls and white dolls, as part of the experiment. The children were asked which dolls were nice, which were bad, and which they’d like to play with. Overwhelmingly, both groups chose the white dolls to play with and gave them positive attributes. Also overwhelmingly, both groups called the black dolls “bad.”

In Davis’ short film, she places two dolls—one black and one white—on a table and asks several black children (mostly girls), a series of questions:


Yes, the pattern remains the same after 50 years. Most of the children said that the black doll was bad, the white doll was good, and they overwhelmingly chose the white doll as the one they liked the best. Sad isn’t it?

When Davis conducted interviews with girls from her high school she got some honest, raw, and sometimes disturbing comments from these ladies. One brown-skinned girl says that the message that she gets from society is that darker girls aren’t smart and that light skin is better than dark skin. Another girl says when she started wearing her hair in a natural style, her mom told her to stop because she was “starting to look African.”

All women raising little black children, please watch this film. It might make you cry, but just dry your tears and remember to tell your little lady or man how beautiful she or he is—-everyday.

“Human beings who are forced to live under ghetto conditions and whose daily experience tells them that almost nowhere in society are they respected and granted the ordinary dignity and courtesy accorded to others will, as a matter of course, begin to doubt their own worth.”


-- Dark Ghetto: Dilemmas of Social Power by Dr. Kenneth Clark, the
the first African-American to earn his doctorate in psychology from Columbia University in 1940.
Posted by Cappuccino Soul at 11/28/2006 12:37:00 PM

Wow! That is one powerful little piece of video.

Paul,
Thanks for commenting. Yes, this film is very moving--even though it's just about 7 minutes long. This young filmmaker has really made a statement that I hope thousands will witness.
alicia

When my 2 girls were little, I bought them both black and white dolls/barbies. My middle daughter, who is darker skin and dark hair (oh...we're caucassion btw), preferred the black dolls because they looked more like her than the blonde/white dolls. Just a lil anecdote :)

Sonia,
Thanks for commenting.
That's deep! That you would buy your daughters little brown dolls. I hope there are other Caucasians out there like you. That sort of thing might be the start of something wonderful.
Peace,
alicia

Hi there :) Kiri Davis and her film 'A Girl Like Me' are entered in a contest for a $10,000 scholarship at Cosmogirl. Please help her out by voting for her film and you can vote everyday Here

BronzeTrinity,
As you've requested, I just voted for Kiri Davis and her film "A Girl Like Me." I hope she wins. Her film is a jewel among documentaries.

I often buy my friend's daughters African-American dolls. I want them to know that the world is a big place and that there are people of many skin tones, cultures, ideas in it. If they learn that people are all worthy and valuable no matter what they look like from the time they are young, it will be harder for them to learn/accept racial discrimination later. The reaction I get from parents is interesting -- most of them are cool with it, but a few have not been thrilled. The little girls, however, all love their dolls and don't seem to see thm any differently than all the other dolls they love...

Ms. Katherine,
You are a testament to peace, harmony, and love. Keep on doin' what you're doin'. I'm sure those parents who give you those cool reactions will soon come around. I like your style.
Peace and blessings,
Alicia

Kudos to Sonia for buying black dolls for her darker Caucasian daughter. It could well be an acknowledgement of a precious part of her heritage.

I am of predominately Caucasian heritage, but with a complicated family and personal history.

At age four, I made my own doll out of a blanket and rubber bands. I far preferred her to store bought dolls. I asked my mom to sew black hair, like my own.

I didn't like blonde dolls. About age 3, I used to steal my sister's blonde dolls, beat them up and throw them down the laundry chute into the washing machine.

It is sad that a child would come into the world that way (let's hear it for the anasthetic ketamine-note sarcasm)but anger is a reality. Our nation really needs to acknowledge the depth of the impact of its history, and maybe I'm in a position to be a bridge to understanding.

Dear Roots,
Sounds like you found a great way to get out your anger!
You are a much needed bridge to understanding our concepts of beauty. I hope you find a great way to communicate your message.
Peace,
Alicia

What race is Kiri Davis? Might that have an impact on the children's choices? Is it possible that Kiri Davis' facial expressions/body language might have influenced the choices? Have similar experiments been done with toddlers and (to whatever extent possible) with infants? Is it possible that the children's own life experiences impacted their choices rather than "societal prejudice"? These are some of the questions that must be answered before we take this "study" seriously.

Ron,
Kiri Davis is African-Ameican.
Of course we're all entitled to our own opinion and I appreciate your quesions.
But take a look at the study conducted by Kenneth Clark:

"As early as 1939, Dr. Clark and his wife, Dr. Mamie Phipps Clark, began conducting “doll tests” to try to understand how black children saw themselves. This test was used in the landmark 1954 Brown vs. Board of Education case. Black and white children across the U.S. were shown black dolls and white dolls, as part of the experiment. The children were asked which dolls were nice, which were bad, and which they’d like to play with. Overwhelmingly, both groups chose the white dolls to play with and gave them positive attributes. Also overwhelmingly, both groups called the black dolls “bad.”

I think the fact that Ms Davis is African-American only underscores what seem to be her experiment's findings. In general, given that she is black, wouldn't the young girls unconsciously want to pick the "right" doll, or give the "right" answer, which you might think would be the one which more closely corresponds to the authority figure who is asking the questions? What if Ms. Davis had been white? I wonder if her results would have been even more towards the white doll?

Does anyone know what Ms Davis is doing now? I hope she is continuing to pursue her dream as she is very talented.

Thanks for the great blog, Alicia!

Anonymous,
I had not thought about the "authority figure" factor in all this -- the fact that Kiri Davis is African American and the children wanting to please her. The same could be said for the original experiement back in the 1950s. Dr. Kenneth Clark is black and so is his partner wife who helped with the original doll test.
I don't know what Kiri Davis is doing but I'd guess she's accomplishing wonderful things.

Thanks for reading Cappuccino Soul!