So Redundant in the Modern World 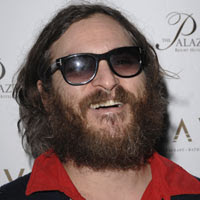 There's something both hilarious and satisfying about Joaquin Phoenix's flight into his own world. However goofy, strange, or perplexing his persona seems these days, you get the sense that he might be trying to be who he was meant to be. I say "might be" because we don't really know if this is an Andy Kaufman-like spoof or not. If it is, he's just doing what we already knew he could do -- acting (brilliantly). If this isn't an act, then how refreshing this whole thing is. But rap doesn't really seem to be Joaquin's thing, not unless he's saving or holding back on the real jewels in his rap/musical arsenal.

Maybe he just wants to be a clown for a while. It's working. He certainly has given me some joyful laughs. Not only was his appearance on the David Letterman Show eerily comical, but his print interviews offer just as much laughable entertainment. Check out this bit from Newsweek's Feb. 23 interview with Phoenix:

Have you seen "Two Lovers?" (his latest movie)
No.

You're not curious about what it's like?
I was in it.

But you weren't in all the scenes.
It's all right. I'm sure they were great.

Most actors who I talk to are interested in how a director puts a movie together.
[Silence] No.

Although I admire his courage, I can't help but wish that Joaquin had chosen a better second life. Why shoot for rap stardom when there are so many worthy, needy causes out there to support and elevate. One such effort is The Sold Project, which I just learned about today. The mission of The Sold Project is to inspire and empower individuals to stop child prostitution before it begins.

From The Sold Project's Web site:

The SOLD Project is a film and a movement. The purpose of the film is to tell the stories of children whose lives have been affected by prostitution, and allow those stories to inspire you to React. The purpose of the organization is to prevent the buying and selling of children by providing scholarships to children at risk. The SOLD Project also seeks to support our partner organizations in Thailand that work in the areas of rescue and rehabilitation for children at-risk.


I can think of hundreds of other deserving organizations and causes that Joaquin could spend his time on if that rap thing doesn't work out. He could help organizations such as The Foster Children's Foundation, which works to identify the many unmet needs of foster children and implement ways to both solve these issues and raise public awareness. The goal of the Foundation is to improve the quality of life for Foster Children and offer them many of the opportunities that non-fostered youth enjoy.

These are causes Joaquin could really sink his teeth into. Why go from being a famous actor to simply a glorified rap musician? "It's so redundant in the modern world."
Posted by Cappuccino Soul at 3/05/2009 03:05:00 PM

I think what Phoenix is doing is gutsy. I think what he will be drawing attention to is the old adage "don't judge a book by it's cover" and people are falling for it. I'm sure when he's done he will be enlightening white people to the concept of "White privledge" of which they don't think of because they don't have to. It's funny, because it's working.

It's very gutsy. I wish I could see more of what he's into creatively. I wish he would speak out more. That's interesting what you say about "white priviledge." I hadn't thought about it. If that's what he doing -- trying to enlighten people -- I wish he'd be a bit more direct.

I can't even begin to understand what is going on in his head but hey that's between him and God!
I will not be surprised to hear about him becoming a recluse and living in a cave or something!

Regina,
You're right, only Joaquin and God knows what he's thinking, but somehow I think he's smarter than people give him credit for. I'm hoping for something refreshing from him.