Since this Romare Bearden exhibit is literally up the street from me, Gigi and I will probably visit the Melberg Gallery again tomorrow (Our first visit was probably back in 2008, shortly after we moved to Charlotte).

I’ve written before about the genius of Romare Bearden. Of course, he doesn’t need my praises – Bearden’s work is well known all over the world. The City of Charlotte, Bearden’s birthplace, is celebrating him this year, which would have been his 100th birthday. His work will be displayed in museums, schools, parks and other places in Charlotte throughout the year.

The Melberg Gallery exhibit, like many of the other Bearden retrospectives this year in Charlotte, is free. If you’re in town – be sure to check it out. The show titled, “An Artist Remembers His Birthplace,” runs through November 12.

In celebration of the 100th anniversary of Romare Bearden’s birth, Jerald Melberg Gallery presents a major exhibition of over forty collages, watercolors and prints featuring the artist’s memories of Charlotte and Mecklenburg County. Romare Bearden was born in his great-grandfather's house in Charlotte, NC, on the morning of September 2, 1911.

Although at the time this was the rural south, his family was prosperous and well respected. At the age of two, Bearden moved with his parents to New York City where they felt there was more opportunity to pursue their interests in journalism and politics. Bearden's memories of Mecklenburg County, North Carolina were ingrained during summer-long visits until he was 14. These memories were the subject of his art as he wanted to transform his experiences rather than merely describe them. I am trying to explore the particulars of the life that I know best; those things common to all cultures, he once said.

Drawing upon the recollections of his Southern roots for inspiration, he conjured up both his own childhood memories and the shared memories of his ancestors. Bearden absorbed the traditional rituals of the church, the hymns and gospels, sermons and testimonies; as well as the traditional rituals of the family, the music of the kitchen, the wash place and fire circle, which permeated his upbringing.
Posted by Cappuccino Soul at 9/30/2011 05:03:00 PM 2 comments: Links to this post

At Myrtle Beach in August 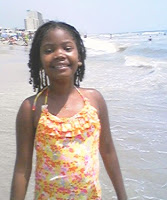 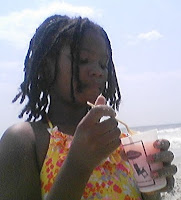 
Today, seek to be found trustworthy through the things you do, the words you speak, the commitments you make, and how you handle the resources entrusted to you.
-- Inspiration Magazine
Posted by Cappuccino Soul at 9/26/2011 05:41:00 PM No comments: Links to this post

I had to re-post this from The Homeless Guy's blog, because not only is it funny -- it's sad:

I got a food box from Second Harvest Food Bank this weekend, and to my initial surprise it included a large package of boneless chicken breasts. And then I looked at the expiration date ~ Dec 6th 2010. There is no way in HELL I'm gonna eat that. This is indicative of the kind of disregard people have for the poor and homeless in this country. People think that giving their garbage away is an act of charity. Well, it's not. Thanks Second Harvest!


It's painful to be self-occupied. 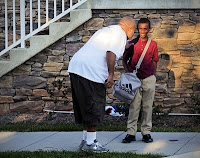 Curtis Watkins has a simple plan: Make sure that children who live in the troubled communities east of the Anacostia River see welcoming black male faces on their way to school in the mornings.

Four times a week, at the crack of dawn, he and a small group of men walk the streets of Marshall Heights and Lincoln Heights in Ward 7, greeting students. Their opening line is often: “Good morning, young brother! Good morning, young sister!”

“Most of these kids don’t see positive male role models, brothers who are just out and about looking out for their well-being,” Watkins said as he strolled down E Street SE, piping up with his greeting to a trio of girls who were scurrying to J.C. Nalle Elementary School. The girls looked a little confused at first, then murmured a “Good morning” back.

“It’ll take them a little while to get used to us, but they’ll start asking us, ‘What y’all doing out here?’ ” Watkins said. “It’s just about having a presence in the community.”

At work, they'll have a celebration to honor people who had birthdays during the third quarter (July - September), at which they'll read little-known fun or unique facts about people. Here's what I turned in:


I once fell onstage while in a production of a play. The audience gasped.
I immediately got back up and walked to position.


Thanks to Ontario writer/director Anthony Sherwood, I now know about a Delaware homegirl who paved the way for African-American female journalists and activists back in the nineteenth century. Sherwood, who produced The Mary Ann Shadd Play in Brampton earlier this year to give students an understanding of the contributions of people of African descent, featured student actors in the production, held in the Peel Region of Brampton. Sherwood said he chose that region because it has a 51 percent minority population.

Sherwood’s Website gives us the following information about Shadd, who accomplished some significant feats, including graduating from the Howard University School of Law in 1833 when she was 60 years old.

Mary Ann Shadd (1823-1893) was born in Wilmington, Delaware of mixed African and European heritage to abolitionist Abraham Doras Shadd and Harriet Parnell. Shadd was an educator, editor, abolitionist, lawyer, social activist and one of the great fighters for women’s rights in North American history. In 1850, Shadd moved from Wilmington, Delaware to Canada to escape the Fugitive Slave Law of the United States. She settled in Windsor, Ontario and started the first integrated school in Canada. At that time, Canada was a segregated society. Shadd believed that separate churches, schools and communities for blacks would ultimately undermine the search for freedom. She campaigned for equality and integration for black people, making speeches and addressing issues of abolition and other reforms. Shadd’s support for racial integration embroiled her in many public disputes with both blacks and whites.

To help fight her critics, in 1853 Shadd started her own newspaper called The Provincial Freeman and thus became the first known black female newspaper publisher and editor in North America. The newspaper continued to be published until 1859 and was a strong proponent for temperance, moral reform, civil rights and black self-help while attacking the racial discrimination blacks faced in North America. It was one of the longest published black newspapers until the Civil War. A colleague of fellow abolitionist and publisher Frederick Douglass, Shadd was instrumental in assisting many runaway slaves to escape to Canada via the
Underground Railroad. Shadd was also a recruiting officer who recruited black soldiers for the Union Army during the Civil War.

A distinguished and gifted educator, Shadd established or taught in schools for blacks in various U.S. and Canadian cities, including: Wilmington, DE; Trenton, NJ; West Chester and Norriston, PA; New York, NY; Windsor, Ontario; Chatham, Ontario; and Detroit, MI. After the Civil War, Shadd moved to Washington, D.C., where she was the principal for various public high schools and wrote regularly for Frederick Douglass’s New National Era and other papers.

In 1883 at age 60, Shadd graduated from Howard University School of Law and was admitted to the District of Columbia bar, and thus became one of the earliest black female lawyers in North America. Shadd fought for women’s rights all her life, joined the National Woman’s Suffrage Association, fought for such rights with suffrage leaders Susan B. Anthony and Elizabeth Cady Stanton, and testified on such issues before the Judiciary Committee of the U.S. House of Representatives. She was also the first black woman to cast a vote in a national election in the U.S.
Posted by Cappuccino Soul at 9/13/2011 10:17:00 AM No comments: Links to this post