A Message from Sister Pamela

Here's a good word for the day that my sister Pamela sent to me. It helped me release some sweet tears today and moved me immensely. I'll try to keep my eyes on the pure, virtuous, beautiful, and true things--the lovely, not the ugly.

Thanks Pam. You'll be my sister forever.

Or simply put from the Message Bible:

Summing it all up, friends, I'd say you'll do best by filling your minds and meditating on things true, noble, reputable, authentic, compelling, gracious—the best, not the worst; the beautiful, not the ugly; things to praise, not things to curse. Put into practice what you learned from me, what you heard and saw and realized. Do that, and God, who makes everything work together, will work you into his most excellent harmonies. -- The Message (MSG)

As my daughter and I rolled back into the Charlotte area from Tennessee, I was playing Free, a Jill Scott song that beautifully fit my state of mind. I haven't purchased Jill's new CD, The Real Thing, yet--partly because I can't really afford it and also because I might not be ready for it. Her music always sticks in my head so long and stirs some serious emotions in me. If you've heard The Real Thing, tell me what you think of it.

Here are the lyrics to Free:

I love what Lebanese poet Kahlil Gibran says about children in his book The Prophet. I try to remember this often.

Your children are not your children.
They are the sons and daughters of Life's longing for itself.
They come through you but not from you,
And though they are with you, yet they belong not to you.
You may give them your love but not your thoughts.
For they have their own thoughts.
You may house their bodies but not their souls,
For their souls dwell in the house of tomorrow, which you cannot visit,
not even in your dreams.

You may strive to be like them, but seek not to make them like you.
For life goes not backward nor tarries with yesterday.
You are the bows from which your children as living arrows are sent forth.

The archer sees the mark upon the path of the infinite,
and He bends you with His might that His arrows may go swift and far.
Let your bending in the archer's hand be for gladness;
For even as he loves the arrow that flies, so He loves also the bow that
is stable.

You shall be free indeed
when your days are not
without a care nor your nights
without a want and a grief,
but rather when these things
girdle your life and
yet you rise above them
naked and unbound.

In the Secret of his Tabernacle

When the wicked, even mine enemies and my foes, came upon me to eat up my flesh, they stumbled and fell.

Though an host should encamp against me, my heart shall not fear: though war should rise against me, in this will I be confident.

One thing have I desired of the Lord, that will I seek after; that I may dwell in the house of the Lord all the days of my life, to behold the beauty of the Lord, and to enquire in his temple.

For in the time of trouble he shall hide me in his pavilion: in the secret of his tabernacle shall he hide me; he shall set me up upon a rock.

And now shall mine head be lifted up above mine enemies round about me: therefore will I offer in his tabernacle sacrifices of joy; I will sing, yea, I will sing praises unto the Lord.

Looking Back at the Water Babies 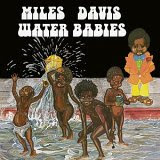 Although Miles Davis recorded Water Babies in the late sixties, the work continues to evoke the perfect blend of joy and sadness in me that no other piece of music has been able to match.

At the top right corner of this blog is the album cover art from Water Babies. (Isn't it gorgeous? Aren't those babies precious?) I have loved this picture since I discovered it many years ago. It reminds me of me and my childhood friends in our Delaware neighborhood playing in the summertime, sweating, and trying to find that blast of water to cool us down. I've seen these scenes also in Baltimore, D.C., Jersey City, NYC, and other places. I'm sure you've seen it too.

The first thing my homegirl Poochie mentioned when she saw the front page of this blog was the Water Babies artwork. I'm sure she was struck with a sense of nostalgia when she saw those children having a ball in the street. (Didn't we have fun back then Poo? Now we can make sure that our daughters get a fresh stream of cool relief, not only when it's hot outside, but for all the seasons, throughout their lives. We'll see to that.)

What I'm Not Going to Do

It's not even the new year, but I've already decided what I'm NOT going to do. I'm not going to put up with intimidating, harrassing comments from people with hollow souls--people whose hearts are dingy and grey.

Poem: A Little Bird Told Me

What a cruel thing
that left your fingertips
and pushed back my breath.

What happened to you hermano?
Tiene ojos sangre
Your wings are crumbling and dry.

What happened to your wings pajarito?
Where is your song?

The song "Nature Boy," made popular in 1948 by Nat King Cole, is one of those songs that has been bouncing around in my head recently. I just started humming it out of the blue. It's a really difficult song to sing, but I was able to hum all of the notes in the song, without remembering most of the words. These are the words that I remembered: "Nature boy," "enchanted boy," who learned that the greatest thing "was to love and be loved in return."

The song writer's story is quite intriguing. A beatnik poet who was born in Brooklyn, eden ahbez, convinced Nat King Cole's manager to bring his tune "Nature Boy" to Cole's attention. (ahbez chose to spell his name with lowercase letters because only God’s name is worthy of capitalization, he said.)

Cole immediately took to the tune and included it in his repertoire. He wanted to record the well-received song but had trouble finding its writer to get the publishing rights. Nat and his manager finally found ahbez—-he was camped out beneath the famous “Hollywood” sign in California. Cole’s version of "Nature Boy" made it to #1 on the Billboard charts in 1948 for eight weeks straight.

Yiddish composer Herman Yablakoff--who claimed that the melody from one of his songs, "Sveig Mein Hartz" (Be Still My Heart), was also the melody for "Nature Boy"--sued Ahbez. The song does, indeed, have that klezmer feel to it. The case was eventually settled out of court.

There was a boy
A very strange enchanted boy
They say he wandered very far, very far
Over land and sea
A little shy and sad of eye
But very wise was he