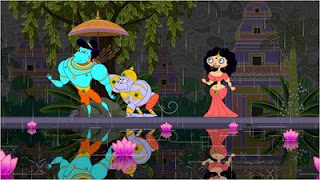 The New York Times reports today about a film festival for children to be held in Manhattan. The Festival starts today and includes three weekends of screenings, filmmaker visits and a children's version of the Oscars, and reception on March 15.

Here are two movies that I wish I could take Gigi to see (I probably would enjoy them more than she would.)

The New Boy
A nine-year-old African boy begins his first day of school in Ireland in this film, directed by Steph Green and Tamara Anghie. The New Boy received an Oscar nomination this year for Best Short Film (Live Action).

Sita Sings the Blues
Nina Paley’s interweaving of the Indian epic Ramayana with the autobiographical story of a female filmmaker’s marital collapse. You're probably thinking, hmmmmm, that doesn't really sound like a film for children.

Here's what Michel Ocelot, director of Azur & Asmar, is quoted as saying in the Times article:

“I never made a film for children,” Mr. Ocelot said in an e-mail message. “That’s the reason why they like my films.” Azur & Asmar, about the fateful friendship of two boys —- Azur, blond and blue-eyed, and Asmar, dark-skinned and Arabic-speaking —- was originally destined for a straight-to-DVD American release.

Also from the Times article:

While the festival’s 100 films from 30 countries offer plenty of animation and fantasy, they also delve into real-world conflicts that affect children’s lives.

“With a great many of these films, the filmmaker would say, ‘That’s not a kids’ movie,’ ” Eric Beckman, who founded the festival in 1997 with his wife, Emily Shapiro, said in an interview.

The 2009 New York International Children's Film Festival will run from February 27 through March 15 at theaters throughout Manhattan. Click here for a schedule of festival events.
Posted by Cappuccino Soul at 2/27/2009 10:05:00 AM