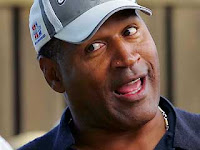 I was reading Patrick the Rogue's blog today and was intrigued by a documentary mentioned in his most recent post that I've never heard of before. The documentary is about O.J. Simpson and the possibility that he did not kill his ex-wife Nicole Brown Simpson. The makers of the film, "The Overlooked Suspect," contend that O.J. took the rap for his son Jason Simpson, who is now 38 years old.

"The Overlooked Suspect" is based on the book, O.J. is Guilty, But Not of Murder by writer and private investigator William Dear. Published in 2000, the book is the result of a six-year investigation by Dear and asserts that Jason Simpson committed the murders of Brown Simpson and Ronald Goldman.

Here's a bit from Chapter One of Dear's book:

“Never assume. Always verify.” Every detective, public defender and investigative reporter should have those four words tattooed in black ink on their foreheads. Then every time they looked at themselves in the mirror they would be reminded of the great responsibility they have to themselves and to the public to check their facts before jumping to conclusions. Lives are on the line–and not only those of the falsely accused.

I never believed O.j. did it. Never. I always thought he was innocent. I watched every bit of the trial and even had to transcribe the videos for the news back then.

Kendall,
Like you, my gut feeling has always been that he did not do it. Seems like you really were had access to much more information than me. I didn't watch all of the trials, but what I saw led me to believe that he didn't do it. Maybe this book and film will shine a light on whatever the truth is.
Alicia

Alicia,
I should admit that my brother and I used to make fun of my Dad for contending the O.J. was innocent. My pop was a very unlikely advocate of O.J., a white (Irish-American), late middle aged, retired Army officer and former high school principal. He was a conservative Republican and a fairly firm law-and-order type. But he was insistent that they got the wrong guy in the O.J. case. I hadn't given it much thought, just thought it was one more quirky idea of my Dad's. But maybe he was right after all. Jason is now 38 years old by the way. He was 24 at the time of the murder - at his testosterone-fueled prime, both physically and emotionally. Anyone who has studied crime in the slightest would realize that a 24 year old with a history of violence and emotional outbursts is a much more likely candidate than a well-off, middle-aged man who has a firm identity and place in the world.

Shaun,
I know you weren't the only ones having fun about OJ's possible innocence. Sometimes the truth takes a lot more effort to find.
Thanks for the clarification on Jason's age. You're right when you say he is a more likely candidate! Maybe we'll find out soon!
Alicia

It's about time. Now when will justice happen. I am so tired of just us. Why is it that they - we are all ways so quik to get the torches, pitch forks and hang men's noose. I am ready for IN YOUR FACE.