Gather Together in My Name

A few of the books that I read as a child have remained with me in my memory, my heart and probably in my writing. No writers made more of an impact on me as a girl than James Baldwin and Maya Angelou. Both spoke to me in ways that I find hard to fully explain, but I felt at home with these two. They seemed to know the psyche and spirit of people that seemed familiar to me. Their writing also spoke to me personally and taught me so much about tragedy, love, despair, resiliency, and triumph.

Maya Angelou is a true Renaissance woman. She's been a dancer, writer, actor, poet, diplomat, screenwriter, film director, and poet. Not only is she an immensely gifted artist, but she has overcome such massive obtacles that her series of autobiographies should be given to all young black girls as an example of how to triumph over tragedy.

When Angelou's parents divorced when she was 3 years old, she was sent to Stamps, Arkansas where her grandmother raised her. While visiting her mother when she was 7, her mother's boyfriend raped her and her life seemed to be altered irrevocably by that horrid event. Maya told only her brother Bailey what happened and as you can imagine, the other relatives, including several tough uncles, soon found out. Well, one uncle took justice into his own hands and killed the child molester. Maya, feeling guilty about the man's death, stopped talking for years. It was only after a school teacher introduced her to poetry that she began speaking again -- reciting poetry. In her first autobiography, I Know Why the Caged Bird Sings, Angelou tells this part of her story.

Her second book, Gather Together in My Name, is one that I just recently read again. I'm glad to say that the book was just as precious for me this time around as it was when I read it as a child. I was especially struck by the series of bad relationships that Maya fell into so recklessly. (How I sympathize!) It's obvious that her previous brush with abusive sexuality and her mom's history of too many boyfriends and husbands gave her a distorted view of men and sex.

When Maya was preyed on by a smooth talking older man, who turned out to be a pimp, she fell for his fake adoration and he talked her into working as a prostitute. Again Maya confided in her brother Bailey who put a finger in her face and with a quiet rage told her how she was being used and duped by a hustler. Bailey demanded that she go back, pack her bags, pick up her toddler son, and return home -- immediately. Thankfully, Maya obeyed.

Maya's mother also gives her daughter some advice in Gather Together in My Name, that struck me as sound wisdom for black girls and women, even today, over 60 years later. This is what her mom told her, after one of her own beaus tried to cut her with a knife:

"People will take advantage of you if you let them. Especially Negro women. Everybody, his brother and his dog, thinks he can walk a road in a colored woman's behind. But you remember this, now. Your mother raised you. You're full-gown. Let them catch it like they find it. If you haven't been trained at home to their liking tell them to get to stepping." Here a whisper of delight crawled over her face, "Stepping. But not on you." Gigi and I had a marvelous time over the weekend as we ventured over to Winston-Salem, N.C. for the first time. Since it's only 1 1/2 hours from Charlotte, Winston-Salem is a perfect day trip for us.

We visited the Diggs Gallery at Winston-Salem State University first and looked at the African-inspired art of Charles Searles, a Philadelphia-born artist who says he is interested in "making work that feels integrated and crosses cultures.” An exhibition of Searles' work will be on display at the gallery until September 12. If you're anywhere near Winston-Salem, I highly recommend that you check out Searles rhythmic, stimulating and energetic pieces, which include sculptures, paintings, pencil and ink drawings. 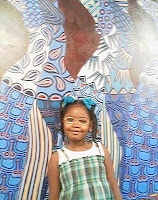 After checking out the museum, my little lady and I headed over to Trade Street to do some shopping and eating. I picked up some unique jewelry in a couple of shops that reminded me of the "Hippie" spots that the TV character Monk says are in San Francisco.

We ended the evening enjoying a free Music Festival at Trade and Sixth Street (the Avenue of the Arts), which featured lively blues and jazz by a singer named Velma Houston and her band. Velma really knows how to put on a show -- she got several people up and dancing (some quite provocatively), to her music. What a treat!

Below are a couple of photographs of "found art" built into a wall on Trade street in Winston-Salem. 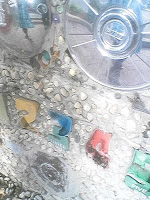 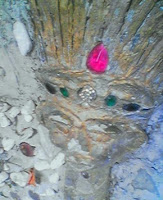 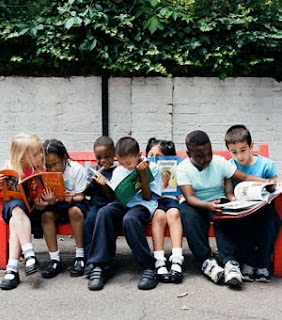 Are you feeling overwhelmed as a single mother? Have you perhaps dreamed of sharing your childcare needs with others? What about holding a pow wow to create tutoring opportunities to help accelerate your child's progress in school?

Consider that there may be other mothers in the Charlotte area who feel like you do and would like to support each other.

As a single mother in Charlotte, N.C., I'd like to hear from others who would like to join in forming a support group for single mothers to discuss our needs, hopes, and dreams for our families.

If you want to join in the effort to help yourself, your children, and other single mothers, please contact Alicia at Ramalicia@aol.com.
Posted by Cappuccino Soul at 8/20/2009 02:59:00 PM 2 comments: Links to this post

Healthcare Plan: Win-Win for Me

I'm sure I wouldn't be the first to admit to be muy confused about this whole Obama healthcare initiative. I haven't said much about the controversy for two reasons:

1. As stated above, I don't completely understand what all the intricacies and implications of the plan are. I'm also not completely sure what the politicians mean when they talk about:

2. I figure it's a win-win situation for me, whatever healthcare policy they adopt, since presently, I DO NOT HAVE healthcare coverage. I'm bound to get SOME KIND of help from the deal. At least, that's what I'm hoping.
Posted by Cappuccino Soul at 8/18/2009 08:08:00 PM 8 comments: Links to this post

Prostitution: Girls on Our Streets

This is an opinion piece from The New York Times that was originally published in the spring. This story needs to be republished as many times as possible. What would you do if you knew the name of the police officer that raped the child mentioned in Kristof's article? I know what I'd do.

Something must be done.

Girls on Our Streets
by NICHOLAS D. KRISTOF
Op-Ed Columnist

Jasmine Caldwell was 14 and selling sex on the streets when an opportunity arose to escape her pimp: an undercover policeman picked her up.

The cop could have rescued her from the pimp, who ran a string of 13 girls and took every cent they earned. If the cop had taken Jasmine to a shelter, she could have resumed her education and tried to put her life back in order.

Instead, the policeman showed her his handcuffs and threatened to send her to prison. Terrified, she cried and pleaded not to be jailed. Then, she said, he offered to release her in exchange for sex.

Afterward, the policeman returned her to the street. Then her pimp beat her up for failing to collect any money.

“That happens a lot,” said Jasmine, who is now 21. “The cops sometimes just want to blackmail you into having sex.”

I’ve often reported on sex trafficking in other countries, and that has made me curious about the situation here in the United States. Prostitution in America isn’t as brutal as it is in, say, India, Nepal, Pakistan, Cambodia and Malaysia (where young girls are routinely kidnapped, imprisoned and tortured by brothel owners, occasionally even killed). But the scene on American streets is still appalling — and it continues largely because neither the authorities nor society as a whole show much interest in 14-year-old girls pimped on the streets.

Americans tend to think of forced prostitution as the plight of Mexican or Asian women trafficked into the United States and locked up in brothels. Such trafficking is indeed a problem, but the far greater scandal and the worst violence involves American teenage girls.

If a middle-class white girl goes missing, radio stations broadcast amber alerts, and cable TV fills the air with “missing beauty” updates. But 13-year-old black or Latina girls from poor neighborhoods vanish all the time, and the pimps are among the few people who show any interest.

These domestic girls are often runaways or those called “throwaways” by social workers: teenagers who fight with their parents and are then kicked out of the home. These girls tend to be much younger than the women trafficked from abroad and, as best I can tell, are more likely to be controlled by force.

Pimps are not the business partners they purport to be. They typically take every penny the girls earn. They work the girls seven nights a week. They sometimes tattoo their girls the way ranchers brand their cattle, and they back up their business model with fists and threats.

“If you don’t earn enough money, you get beat,” said Jasmine, an African-American who has turned her life around with the help of Covenant House, an organization that works with children on the street. “If you say something you’re not supposed to, you get beat. If you stay too long with a customer, you get beat. And if you try to leave the pimp, you get beat.”

The business model of pimping is remarkably similar whether in Atlanta or Calcutta: take vulnerable, disposable girls whom nobody cares about, use a mix of “friendship,” humiliation, beatings, narcotics and threats to break the girls and induce 100 percent compliance, and then rent out their body parts.

It’s not solely violence that keeps the girls working for their pimps. Jasmine fled an abusive home at age 13, and she said she — like most girls — stayed with the pimp mostly because of his emotional manipulation. “I thought he loved me, so I wanted to be around him,” she said.

That’s common. Girls who are starved of self-esteem finally meet a man who showers them with gifts, drugs and dollops of affection. That, and a lack of alternatives, keeps them working for him — and if that isn’t enough, he shoves a gun in the girl’s mouth and threatens to kill her.

Solutions are complicated and involve broader efforts to overcome urban poverty, including improving schools and attempting to shore up the family structure. But a first step is to stop treating these teenagers as criminals and focusing instead on arresting the pimps and the customers — and the corrupt cops.

“The problem isn’t the girls in the streets; it’s the men in the pews,” notes Stephanie Davis, who has worked with Mayor Shirley Franklin to help coordinate a campaign to get teenage prostitutes off the streets.

Two amiable teenage prostitutes, working without a pimp for the “fast money,” told me that there will always be women and girls selling sex voluntarily. They’re probably right. But we can significantly reduce the number of 14-year-old girls who are terrorized by pimps and raped by many men seven nights a week. That’s doable, if it’s a national priority, if we’re willing to create the equivalent of a nationwide amber alert
Posted by Cappuccino Soul at 8/11/2009 04:13:00 PM 6 comments: Links to this post

Gigi at the Pool 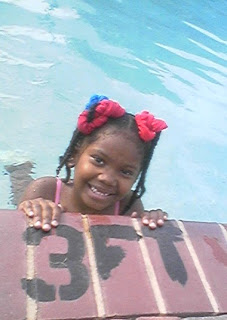