New Orleans Public Schools have a drop out rate of over 70%.

New Orleans has the highest incarceration rate in the industrialized world. 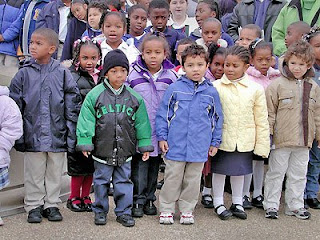 After reading the cold facts above, you can imagine in which direction the film Left Behind: The Story of New Orleans Public Schools will go. Left Behind is a 90-minute documentary that tells the story of three African-American high school seniors as they navigate through their final year of high school in New Orleans, one of the poorest cities in the state, Louisiana -- a state ranked as the poorest in America -- one of the most violent countries in the industrialized world.

"In some bushes of Africa, when they greet you, they don't ask you how you're doing, they say, "How are the children?" because they know if the children are OK, then they know you must be OK also." (Speaker: Ray Nagin, New Orleans Mayor)

Here's what a few people are saying about the film:

“A powerful and important look at politics at the local level.”

“You've embraced chaos . . . the true human experience . . . and come out with a terrific human story.”

“After covering the New Orleans Parish Board for 20 years, I thought I knew everything. And this documentary showed me a whole bunch I didn’t have clue on. So I, for one, thank you . . . . Because, I guarantee, when you watch the documentary, these kids will break your heart.”

”Ya’ll got some balls, man, that’s all I'ma say. Ya’ll got balls. Much Respect.

Left Behind was directed by Vincent Morelli and will be screened:

Take a peek at this profound documentary: