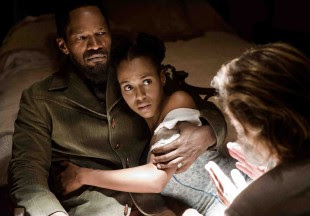 Check out this excerpt of the NPR interview Quentin Tarantino gave with Terry Gross on Fresh Air.  He talks about his film Django Unchained. This section deals with the way directors usually present films about history and how he felt his approach was much more real and of course, exciting. Here it is from the horse’s mouth — which is always a good way to try to discern what’s on somebody’s mind.

I enjoyed the film thoroughly — what about you?

GROSS: Is it a coincidence, is it any coincidence that after taking on World War II and the Nazis in "Inglourious Basterds," you set your new movie in the time of American slavery? So you've taken two absolutely horrible chapters in history whereas, you know, your other films are contemporary; you know, set it contemporary times. So what made you want to take on just like, two just abhorrent chapters of history?

TARANTINO: Because I actually thought they would be really good stories. I've had both stories in my head for a while. It just took them a while to sit in the incubator until they were ready. And "Inglourious Basterds" popped out first, and then it really set the stage for "Django." But I like the idea of telling these stories and taking stories that oftentimes, if played out in the way that they're normally played out, just end up becoming soul-deadening because you're just watching victimization all the time. And now, you get a chance to put a spin on it and actually take a slave character, give him an heroic journey, make him heroic, make him give his payback, and actually show this epic journey; and give it the kind of folkloric tale that it deserves, the kind of, you know, grand opera stage it deserves.

GROSS: So there's a lot of violence in your movie. Slaves are being whipped and tortured, slaves forced to fight to the death like gladiators, lots of shooting and splatter. So what are your - how do I put this exactly? What are your limits for, like - what's your sensibility for how much splatter, how much violence, how much sadism feels like right, like it's part of the genre, like there's a certain, like, style to it that you're trying to express? And what's going to the point of, like, past where you want to go, to the point of, like, revulsion and exploitation to, you know, to a degree that's just - I don't want to use the word immoral but just, you know, bad?

TARANTINO: Well frankly, I mean, you know, what happened during slavery times is a thousand times worse than I show. So if I were to show it a thousand times worse, to me that wouldn't be exploitative; that would just be how it is. If you can't take it, you can't take it.
Now I didn't want - I wasn't trying to do a "Schindler's List" you-are-there-under-the-barbed-wire-of-Auschwitz kind of movie. I wanted the film to be more entertaining than that. Like I said, I wanted it to be an exciting adventure movie.

But there's two types of violences in this film: There's the brutal reality of the violence that slaves lived under, under the slavery laws, 245 years. And then there's the violence of Django's retribution. And that's movie violence, and that's fun, and that's cool, and that's really enjoyable. It's kind of what you're waiting for.

I went to see this movie last Friday with 3 other seniors. While the lights were off I thought the theator was full of young people but to my surprise there was more people my age and older and we all enjoyed the movie (even my husband). I did turn my head at some of the bloody scenes thou.

This is a phenomenal film. Tarantino managed to capture the love story, the revenge, the horrors of slavery and the comedy -- and add in some hip hop set against the 1860s, and you can help but see it as a work of art. I loved it! I'm glad you all enjoyed it.