I really can identify with this post at Vuvee.com:

OK, I’ve had enough of the dire news on the TV, Radio, and Internet lately. The finger pointing and gloomy outlook just create more anxiety and fear.

I try to avoid watching TV, reading the paper and listening to the radio. Even better, I often use meditation CD’s or my mind machine (see earlier posts) to help me escape the constant barrage of bad news.

Like the writer at Vuvee.com, there are times when I simply cannot look at certain television stations. (Actually I gave up channels like BET, MTV, VHI, and all commercials that exploit women, and those that promote the slew of Viagra-like products, almost two years ago). Some of the noise, music, and disturbing images on those channels hurt my ears and my spirit. It's painful to watch the lunacy, exploitation, degradation and plain old bad taste that pervades the airwaves. 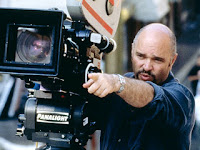 I've limited my TV watching to a few shows only. I love to watch The View, Monk, CSPAN, and The Directors (on the Reelz Channel). I love the idea of a few women getting together to give their two cents on hot topics or just gab about silly stuff. Monk is just a pure combination of good acting, good writing and quality producing. CSPAN seems to be everywhere, from the Presidential inauguration, to little bookstores across the country featuring authors of books about historical heroes and other fascinating subjects. The Directors is not only entertaining, but educational and inspiring. It's a treat to hear Directors like Anthony Minghella and Sydney Pollack talk about their lives and cinema creations just days, or sometimes even minutes after they've passed on.

Above: Photo of the late Anthony Minghella, director of Truly, Madly, Deeply, among other great films.

Editor's note: Anthony Minghella and Sydney Pollack have Oscar nominations as producers (Best Picture) for "The Reader" this year. What a sweet goodbye that would be to these two remarkable directors who both died while the film was in production.
Posted by Cappuccino Soul at 1/27/2009 10:50:00 AM

Hey, I'm just the opposite. I really don't have the time to watch tv, but I enjoy seeing all of the different programming. It's just a chance for me to see how things change, cultural influences taking hold, and some not letting go. I like tv! Like I said, I don't watch it much, but when I do I'll check out all of the news stations at once. I'll flip thru all of them just to see how they are reporting the news. What story do they lead off with? What anchors are they using? I'm checking out the effects of the elections! It's fun. I haven't watched televsision all day, and it's about 4pm, but I wouldn't mind sneaking in a minute or two!

My kids love discovery, travel and things like that! They really are into going different to different places with television and reading! It has it's place and time. Well, anyway, I enjoyed your comments!

Kendall,
I don't like most of those "cultural influences taking hold." I guess I have to say, "I know I've been changed." Most of that stuff makes my stomach turn. I mostly record the few things that I want to see on my DVR. That stuff simply hurts my psyche.

Gigi does like Disney, PBS, Nickelodeon, etc. Most of the children's programs are cool and they have brought back a new Electric Company! But even my daughter prefers the old one. I introduced her to Morgan Freeman and the old E company a few years ago!
peace chica.
alicia