Recognize! There's a Muslim in the House. 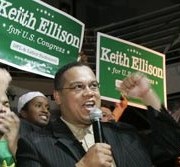 By now, most people are aware that California Congresswoman Nancy Pelosi is set to become the first female speaker of the House in the new year. This is most definitely something to celebrate.

But have you heard about Keith Ellison, the newly elected U.S. House representative from Minnesota—the first Muslim to be elected to Congress? Ellison is also the first African-American from Minnesota to win a U.S. House seat. He has served as a member of Minnesota’s State House since 2002.

This 43-year-old Michigan native, who converted to Islam from Catholicism when he was 19, seems to be well liked in Minnesota. He was endorsed by the Twin Cities’ American Jewish World newspaper, over his rival Alan Fine, who is Jewish.

As you can imagine, there’s been lots of investigation into Ellison’s possible ties with the Minister Louis Farrakhan and the Nation of Islam. It’s not clear whether Ellison was ever an official member of the Nation, but he does seem to reiterate that his connection to Farrakhan and the Nation was "limited" to helping to organize as aspect of the Million Man March in 1995.

"It's very interesting that Minnesota would be the first state to send a Muslim to Congress," Lawrence Jacobs, Director of the Center for the Study of Politics and Governance at the University of Minnesota, told Voice of America.

"I think many Americans think of Minnesota as a state that's overwhelmingly dominated by whites, but Minnesota has changed in rapid and dramatic ways," Jacobs said. "The other key factor is that Minnesota has a long tradition, stretching back to Hubert Humphrey and Walter Mondale, in supporting civil rights and the inclusion of African-Americans and others of color in the political process."

Ellison, who is married with four children, favors gay rights and abortion rights. While serving as a Minnesota state representative, Ellison authored and passed a repeal of vagrancy laws that criminalized homelessness and raised funds for homeless outreach. He fought against a gay anti-marriage bill and authored a bill to restore voting rights to ex-offenders.

This week Ellison told CNN that he is inspired by the Quran’s message of "an encompassing divine love, and a deep faith that guides my life every day."

He sounds great! I admit to having a longtime wariness about the Nation of Islam (I grew up outside of Chicago and went to college in Chicago, and had some not-great exposure to the Nation there), so I'll be keeping an eye out for stories about any possible connections there. But that list of his stances sure makes him sound very cool. Go Keith!

Kate,
Thanks for commenting. Yes, he does indeed sound cool. It's quite a refreshing change. I'm anxious to see what he brings to the House.
Peace,
alicia