Breaking Bread with the Poor

Recently The Homeless Guy quoted this passage from Luke 14:12-14. It's a timely quote given the number of homeless people in Nashville and the country, not to mention those who live at or near the poverty level. 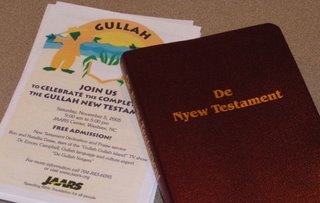 And here's a beautiful translation of the same passage from De Nyew Testament (The New Testament translated in Gullah, Sea Island Creole). This Bible has been translated from the Greek by a team of experts who know the Gullah language intimately. For those of you not familiar with the Gullah or Geechee people of South Carolina and Georgia, look for more information about these amazing folks on this blog in the near future.