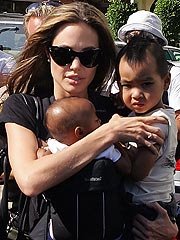 In Angelina Jolie's recent article for the United Nation's Refugees magazine, she said that Europeans and other Western nations have turned their backs on struggling refugees.

"It's a scandal, really, in such a rich world, that we are not even finding a way to help feed refugee families properly," she wrote.

Jolie also described her disgust over a photo printed in an earlier 2006 edition of the magazine that showed a white couple lounging on a beach, ignoring a black man's dead body that had washed ashore.

If Angelina keeps calling attention to stark injustices like these, we may just have to adopt her as an honorary sister! Click here to check out the full Associated Press story.
Posted by Cappuccino Soul at 10/12/2006 12:50:00 PM