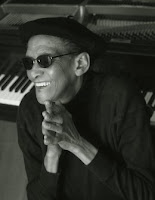 You never know what your children will remember from their early years. I was surprised yesterday when Gigi was drawn to a Jimmy Scott video on Youtube that I was playing. “That’s so sad,” she said, and “he’s so old.” “Yes, he is,” I told her, “but he’s really singing this song.” The song was, “Slave to Love.” It’s the very song and performance that introduced me to Jimmy Scott in the late 90s. If you don’t know Scott’s music, you’re missing something powerful. He sings so effortlessly, with such conviction and feeling. It’s hard not to cry as you listen to him croon such songs as “Holding Back the Years,” “Sometimes I Feel Like a Motherless Child,” and of course, “Slave to Love.” When the song ended, Gigi asked me what the singer’s name was. When I told her she screamed, “Jimmy Scott! Jimmy Scott?! Oh, my God.” Then she ran to the closet where we keep our CD collection to find one of his recordings, Bravo Profiles a Master: Jimmy Scott. I used to play Scott’s music to Gigi when she was an infant until she was about four, at bedtime to help her go to sleep. “I remember Jimmy Scott. He’s a GREAT singer! I can’t believe that’s him...Wow." At least she knows great singing when she hears it. Scott, who has Kallmann’s syndrome, was only 4’ 11” until he was 37 — he then grew to be 5’7”. The disease prevented him from reaching puberty and left him with a contralto range that causes many to mistake his voice for that of a female. Lionel Hampton gave Scott the nickname “Little Jimmy Scott” because of his small build. Scott, born on July 17, 1925 in Cleveland, is now 86 years old. In my opinion, he's one of the great ones.
Posted by Cappuccino Soul at 5/07/2012 05:07:00 PM

Nice! Yes I would have thought a woman was singing had I listened only. Vey nice sound though. I wish there were more music clubs like that in Charlotte.

Yes, many people think he's a woman when listening.
He's such a great artist. You bring up a good point about the lack of music clubs in Charlotte. I've thought the same thing -- maybe you'll have to get your own jazz band together and play a few venues.....:-)

He's such a true artist. His story is amazing also. He had me crying on "Slave to Love," the first time I heard it, AND "Sometimes I Feel Like a Motherless Child."

Getting my own jazz band together sounds likes fun. Not to mention having a group of people around me that get me. I might just have to run with that idea. :)