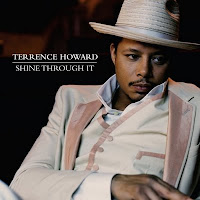 Recently I was leafing through an old New York magazine from last Fall, looking for pictures to use for my ESL class, when I saw an announcement in the Nightlife section regarding a Terrence Howard performance with his band at Joe's Pub in Manhattan. I had no idea he had a band. Then I remembered how he talked about his love for music and how he loved to play the guitar and sing when he was promoting the film Hustle and Flow. He mentioned that it was odd that he was playing a rap singer since he wasn't a rap fan -- at all.

I searched YouTube and found some performances by Howard. I must admit, I don't much like his song, "Sanctuary," but I'm quite taken with another number he calls "Love Makes You Beautiful." It's a sad kind of song, with nice instrumentation and haunting background singing by, what sounds like, children. The song (album version) also features a segment that includes Howard and a woman speaking some words about Love that have been directly inspired by the Bible:

Howard's album, titled "Shine Through It," didn't shake up the charts, but I'd like to hear more music from Howard anyway. He's got a unique and melancholy musical style that's at least heartfelt and creative.

Here he is singing, "Love Makes You Beautiful" on the Late Show with David Letterman last Fall: