A Father Recalls the Death of His Little Girl 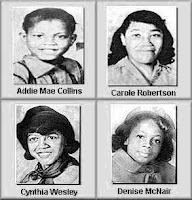 This is the anniversary of the horrendous bombing of the Sixteenth Street Baptist Church in Birmingham, Alabama that killed four young girls -- Addie Mae Collins, Carole Robertson, Cynthia Wesley and Denise McNair. I heard a report on NPR today that I couldn't finish listening to. The report was titled "Father Recalls Deadly Blast At Ala. Baptist Church," and as the title suggests the father of one of the girls, Denise McNair, was interviewed.

"Do you mind if I ask you about that day?" the reporter asked McNair.
"No, I don't mind," he says quietly.

I can't imagine being able to think about it as a parent, much less talk about it. But this man bravely told what he remembered about that day. He talked about how the four girls were in the morgue, "side by side, on the table."

I don't even want to imagine what that looked like.

McNair and his wife Maxine are the last surviving parents of the girls that were killed in the tragic crime.

Here's a bit of what Wikipedia says about the tragedy:

During the civil rights movement of the 1960s, Sixteenth Street Baptist Church served as an organizational headquarters, site of mass meetings and rallying point for blacks protesting widespread institutionalized racism in Birmingham, Alabama and the South. The reverends Fred Shuttlesworth, who was the chief local organizer, and Martin Luther King, Jr. were frequent speakers at the church and led the movement.

On Sunday, September 15, 1963, Thomas Blanton, Bobby Frank Cherry and Robert Edward Chambliss, members of the Ku Klux Klan, planted 19 sticks of dynamite outside the basement of the church. At 10:22 a.m., they exploded, killing four young girls–Addie Mae Collins, Carole Robertson, Cynthia Wesley and Denise McNair–and injuring 22 others. They were there preparing for the church's "Youth Day". A funeral for three of the four victims was attended by more than 8,000 mourners, white and black, but no city officials.

This is a prime example of terrorism.

Hi Lisa,
This is very interesting. I listened to the interview with the father of one of the slain girls. He gave a good interview. What a sad story.
Auntie T

Hey Auntie,
He is amazing. Can you imagine giving such an interview? I can't.
Lisa