Coney Island: How Sweet It Is 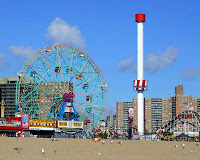 "How Sweet It Is" -- This is what Brooklyn whispers to you as you cross over the Verrazzano-Narrows bridge into the borough. The bridge is named for Italian explorer Giovanni da Verrazzano, the first known European navigator to enter New York Harbor and the Hudson River.

This was my first time back in Brooklyn in many years, but Brooklyn is still Brooklyn -- lots of people, densely populated, lots of different languages and colorful people. I love it! My daughter thought it was pretty special too. After we passed the bridge and began to see the buildings and people I said, "There it is babe. There's Brooklyn!" She paused and sighed, "It's beautiful."

Beauty truly is in the eye of the beholder.

We headed for our destination -- Coney Island -- a place my daughter has been excited about since she heard about it on one of her favorite children's television programs. Since my parents live only 2 hours from the fabulous City of Rocks as it is also known, I decided to trek on up to Brooklyn from Delaware last Saturday with my little lady.

We had a blast. We rode on many rides, and put our feet in the sand and water. We also tasted a bit of the Coney Island cuisine, which includes Nathan's Famous, Regazzi pizza, and Gino's delicious Italian Ices.

We also got to check out the regal statue of Pee Wee Reese and Jackie Robinson by sculptor William Behrends, which was unveileved at KeySpan Park (home of the Brooklyn Cyclones) on November 1, 2005.

The monument consists of two 8-foot-tall bronze figures that stand on a six-sided pedestal inscribed with the following words:

This monument honors Jackie Robinson and Pee Wee Reese: teammates, friends, and men of courage and conviction. Robinson broke the color barrier in Major League Baseball, Reese supported him, and together they made history. In May 1947, on Cincinnati's Crosley Field, Robinson endured racist taunts, jeers, and death threats that would have broken the spirit of a lesser man. Reese, captain of the Brooklyn Dodgers, walked over to his teammate Robinson and stood by his side, silencing the taunts of the crowd. This simple gesture challenged prejudice and created a powerful and enduring friendship.

Hey Lisa,
I have just gotten a history lesson on Coney Island. It sounds very interesting and seems as though you and Gigi had a wonderful time. Thanks for sharing!
Auntie T

Auntie T,
It was truly fun and it's free to get in! You only have to pay for the rides.
Love,
Lisa

I"m very sorry we missed the fun. Maybe next time.
love ya, poochie

Hey Sister,
Definitely next time! Love you too.
Lisa

Great info and a great exsperence for Giovanni. When she gets a little older she can look back at all the great places that mom is taking her now. She might just take MOM some places later.

Anonymous,
My little lady and I had a marvelous time. Our little family.

Experience the Love of the Almighty whose love is beyond comparison to the earthly love of mother, brother, sister or father who return to the earth from which they came. Let her know that there is someone who loves her even more than family and who will be there for her forever; neither death nor desertion can overtake the Love of God.

Anonymous,
I want to thank you for reminding me that the LOVE of GOD is above and beyond and more glorious than any other love -- from a mother, father, sister, brother, friend, whoever! Thank you, thank you. I will continue to tell my daughter about God's unending and unlimited love and acceptance. God Bless you!!!
Peace,
Alicia

Aaaaahhh, Brooklyn, my birthplace! I loved living and growing up there. And Coney Island will forever be a landmark! Nathans hot dogs and the Cyclone are my fondest memories of Coney Island!!

Hey Regina!
Girl, I didn't know you were from Brooklyn! We had a ball..... and yes, Nathan's was awesome and those Italian Ices hit the spot.
:-)
Did you hear that they've closed down Astroland? What a shame.
:-(
Alicia