In Search of Oprah’s House 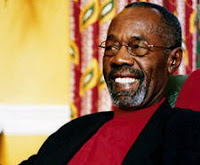 I’ve heard rumors (from my friend Annette in Franklin, Tenn.) that Oprah Winfrey is building a house in Brentwood, Tenn., just outside Nashville. This would make sense since Oprah’s father, Vernon Winfrey, lives in Nashville. Maybe she wants to have a place to reside while she’s visiting her dad who owns and operates a barbershop called Winfrey’s Barbershop. Mr. Winfrey has also been featured in "Cuttin' Up," Craig Marberry's book about barbershops as community gathering places for black men. Mr. Winfrey is also a character in the play, “Cuttin’ Up,” by Charles Randolph-Wright, which is based on the book. The play has been produced all over the country and is currently running at the Pasadena Playhouse in California through April 15.

Annette and I are trying to figure out how we can get copies of our resumes, writing samples, and evidence of our other talents to the great Oprah. If we only had her address, we could send our resumes to her Tennessee address. Anybody have that information?

I’m regretting not going to auditions for Oprah’s upcoming Reality show called "The Big Give." The Nashville auditions were held about a month ago and I was too overwhelmed at the time with other things to make it. My friend Cheryl in Los Angeles was encouraging me to go, but I just didn’t have the energy. I was hoping that she would go to the L.A. auditions and get in. That way I could have served as her assistant or something. Oh well. In case you don’t know about the show, "The Big Give" will give participants a chance to come up with innovative ways to help other people all across the country.

Oh well. If the show is a success, maybe they’ll bring it back next year. And if they have those Nashville auditions, I promise I’ll go compete Cheryl if you go to the Los Angeles auditions.

Here are some projects I'd create if I had the money that Oprah will hopefull give the contestants on "The Big Give" show:


A free academic summer program for children from 4 to 18 years old.

A free Spanish language program for children and their parents.

A Rites of Passage program for young girls and boys.

A non-profit theater and film organization that would train young people and adults interested in play and film production.

500 Housing Units for the Homeless in Nashville.

Best of luck to you and your friend. I love how Oprah tries to help people help themselves, and your ideas seem to fall right into that category too. I would suggest you Google something like "Oprah's address." You'll probably just get one of her assistants, but it's a starting point.

Her dad looks like some actor I've seen before, but I'm not sure who. If they make that play into a movie (as they probably will eventually) I might be interested to see it.

Anne,
Thanks for commenting.
I think we'd have to be some really good detectives to find that address.

That does sound like a good movie idea. Hopefully it's in the works.

The house her dad lives in in Laurelbrooke subdivision (off Sneed Road) is listed as owned by Overground Railroad, LLC.

"A non-profit theater and film organization that would train young people and adults interested in play and film production."

I thought I was the only one! I would really like to see that opportunity made available to students who otherwise wouldn't be able to afford equipment and have no way to access that level of education in the arts.

That, and a snowboarding camp! ;)

What a wonderful blog.... Allow me to lend some energy to your goal/dream--May it manifest with or without Oprah's assistance... ASHE--
Also, please allow me to spread seeds in the Universe-- as I am a believer that all things first begin in the mind-- as to how I would reinvest the money into our future (the children)and our communities....

1. Free Summer and After School Programs for youths 6-16 that would help them formulate their dream/goal, build belief and confidence that they can indeed achieve all things they committ themselves to, and equip them with skills, resources, and opportunities that would help to plant them firmly on the path to their goal/dream/destiny/excellence.
(We could work on this together as we have similar wants in this area!).

2. A Sacred Wombman Circle of Retreat where we as wombman can come together regulary (without worry of cost and/or babysitters) with the sole purpose of learning, loving, and healing ourselves, each other and ultimately the world. The key lies with us as wombman. We must know it, innerstand it and strengthen our minds, bodies, and spirits to be the strong, intellectual nation builders that we are. For wombman build the nations and the men protect and defend them. Can't build a nation if you are broke down, spread thin, stressed out, cracked out, and caught up in the illusion of it all.
3. African-American Center of Entrepeneurship where the entire family could come and partake in classes of all generes--Culinary Arts, Music, Dance, Theater, Voice Lessons, Foreign Languages, Literacy, Visual Arts, Clay, Pottery, Quilting, Crocheting, Jewlery Making, Masonry, Drum making, Martial Arts, Swimming, Gardening, Sewing, Financial Planning and Strategizing, etc...
This center would serve to equip and enhance skills within African American families; thereby, enabling many more to become businessowners, homeowners, property owners...Financially Independent and Secure.

Well let me stop right there.....I could go on and on and on....and actully have in many of my writing journals. Long Live the Deam!!!!!!

t-hype,
A lot of cities actually already have these types of non-profit centers that teach people about play and film production, including Philadelphia, Atlanta, New York City, and San Francisco. Hopefully Nashville is not too far behind them.
Thanks for commenting.

Quintella,
I'm speechless sister since you have listed everything that I've been dreaming of, INCLUDING the Sacred Wombman Circle of Retreat idea. It so happens that I was going to talk to YOU regarding that possibility.

Also, a sister to both of us, starting whose name starts with the letter "T" suggested that I contact your organization. Needless to say, we WILL talk SOON.

I hope you find Oprah's house, or her father's house, if you think that will help. I meant to suggest that you write to her website or company/show and try to do things that way. Her show does have a website, although I'm not sure of the address. Probably oprah.com or something like that.

Quientella wrote some very beautiful things too. (I would love to read her blog if she has one.)
A children's center sounds great. I would love to see guest speakers there, especially for teenagers.
- Maybe someone successful to inspire them.
- Someone not so successful to warn them what NOT to do.
- A job coach.
- And someone to explain colleges and financial assistance.

Your ideas sound so wonderful, I don't see how anyone could NOT be inspired to help.

Anne,
I know if Quintella had a blog that it would be awesome and inspiring. I don't think she does.