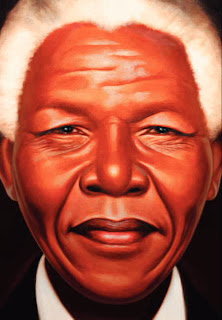 I was both saddened and joyful when I heard about the passing of Nelson Rolihlahla Mandela -- a REAL man, hero, and liberator of his people. After giving so much of his life, energy, and soul to freeing the beautiful people of South Africa, he deserves to rest easy and luxuriate in all of the comforts and bliss that God has planned for him. As President Barack Obama said, Mandela no longer belongs to us, he "belongs to the ages." As he liberated his own people, he also liberated us. He made us realize what true commitment, dedication, compassion, and courage are and I'm sure he inpsired many freedom fighters to walk in his footsteps. When Gigi saw the announcement on the news about Mandela's death, she stopped in her tracks and covered her face with her hands. She was visibly shaken by the news. Even the children recognize the warrior spirit and great courage of President Mandela. I introduced her to Nelson Mandela when she was no more than 3, as he and other famous black people were featured in the book I read to her every night, The ABCs of Black History. Along with other luminaries of black culture, such as Zora Neale Hurston, Paul Robeson, Wilma Rudolph, Martin Luther King and others, Nelson Mandela of course was the featured profile for the letter "N." Rest in peace Madiba! “And as we let our own light shine, we unconsciously give other people permission to do the same. As we are liberated from our own fear, our presence automatically liberates others." I also gave all of the heros of the book theme songs when I used to read it to Gigi. I would sing the song after each entry. Here's Mandela's song: Click here to read some of the text from the book, The ABCs of Black History
Posted by Cappuccino Soul at 12/06/2013 12:22:00 PM

I heard free Nelson Mandela before but this morning I heard Mandela by Frankie B and Maze, it's awesome. Thank You for all the wonderful information, songs and pictures that you give us in your Blog.

You're welcome! I've never heard the Frankie Beverly and Maze tune. I'm gonna check that out!

Thanks sis Alicia for sharing all this beautiful music and writing on Madiba of blessed memory. I think he had the spirit that inhabited the first christian martyrs as they were thrown to wild beasts in the Roman empire. May his soul rest in perfect peace after such a great freedom fight in this world.

That is one of the most eloquent descriptions I've ever read describing Mandela. You are a natural poet.

Yes, I pray also that he enjoys all the peace and rest he deserves.