Floetry: Subtractin' Abstract Messages from Within 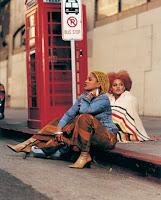 Mi primo Demetrus hooked me up with this Floetry CD that I must admit I didn’t pay much attention to, other than their song “Say Yes,” which is so pretty and sensual that it’s hard not to get into it. I knew that the two, Marsha Ambrosius and Natalie Stewart, had spent time in Philadelphia, and I suspected that either they had influenced Philly’s own Jill Scott or vice versa because of some similarities in their music. So I wan’t surprised to learn that Floetry had written some songs for Scott.

By now everyone knows that Michael Jackson heard and fell in love with the song, “Butterflies,” Ambrosius elegant love song which he included on his Invincible CD (what an ironic name.) Well, I had no idea that the song is also on Floetic, Floetry’s debut album. Ambrosius sings it with authority and passion. A live performance of her perfoming “Butterflies” is breathtaking and is featured on Youtube.

“Floetic” starts out with a number called “Big Ben,” which must have been Floetry’s signature sound (the group has since unfortunately broken up). It’s contagious, quick, clever, funky and smooth. I’m glad cousin D introduced me to this recording that’s so obviously along my taste lines. Thanks cuz.

I'm gonna take you on a ride to a lyrical expedition
Invision, imagine this, I be wishin that everybody would listen
Kissin’ a-- until I was able to step into the arena
Make an impression and lesson and discovering
I out-smarted mathmaticans, blazed through expeditions
Through conditions not envisioned by those who pass predictions
In addition got a mission, a vision, if you would listen
Produce collaboration increasing complications

You understand how my Floetry got you bubblin'
I see you wonderin why you hear my name again
Never the same again, yes we came to win again
And if we fail again then love will conquer pain again
Just take a breath and continue the explanation
Turn off the playstation, still in my attention
Did I mention poetic extention - my redemption
Soul is in suspension at the realization
With poor libation for ethnic formation
Empower this position... more come to listen
Floetry is like a master of chemistry turn your negativity into kinetic energy

Thank you for introducing me to Floetry. I like the sound of the song provided. Peace, ali

These ladies are talented. Too bad the group broke up. But I'm glad you've discovered them. Peace to you.
alicia

Missed the Floetry post....I have their live album with bonus DVD....Sunshine is a personal favorite.....They stayed at Hyatt when I worked there. They gave us free tickets to the performance at Amos Southend.....the show did not disappoint and they signed a photo the next day when I told them how much I enjoyed the show. Very real and very down to earth.

How wonderful! I'm sorry their not together anymore. They were totally unique! It's pretty obvious that they are down to earth. They seem like just plain sisters.

just dropping by to say hello

simply dropping by to say hello