Gigi made a sandal out of silly putty last night -- Ah, the creative minds of children. 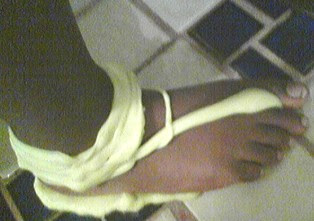 All about silly putty (from Wikipedia):


Silly Putty (originally called Nutty Putty] and also marketed by other companies as Thinking Putty, Bouncing Putty, Tricky Putty and Potty Putty), is the Crayola owned trademark name for a class of silicone polymers. It is marketed today as a toy for children, but was originally created by accident during research into potential rubber substitutes for use by the United States in World War II.

After its success as a toy, other uses were found. In the home, it can be used to pick up dirt, lint, and pet hair. The material's unique properties have found niche use in medical and scientific applications. It is used in large quantity by physical therapists for rehabilitative therapy of hand injuries. A number of other brands (such as Power Putty and TheraPutty) alter the material's properties, offering different levels of resistance. The material is also used therapeutically for stress reduction. Because of its adhesive characteristics, it was used by Apollo astronauts to secure their tools in zero-gravity.