Brownstones to Red Dirt: Children Write from the Heart 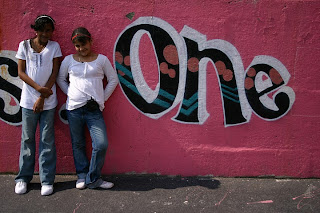 I was just telling my 7-year-old daughter about the joys of having pen pals in other parts of the world. This film, "Brownstones to Red Dirt," shows the power of words and the impact that reaching out to others can have. When I was a child, I had pen pals in England, Cameroon and Peru. I'm sure my correspondence with these children opened my eyes and heart to people from all over the world.

In 1990 the NYPD declared the Bedford-Stuyvesant neighborhood of Brooklyn an "Impact Zone," where, in just three square miles, there were 139 murders. At the same time, across the Atlantic Ocean in the African nation of Sierra Leone, a brutal 11-year civil war resulted in a devastated country and thousands of orphaned children. Today, the Respect pen pal program is attempting to bring these two groups of children together through the simple act of writing letters. This moving documentary shows how that experience not only helps shape the children's lives, but also shows them that even if they can't count on the world, they can count on each other. Brownstones to Red Dirt captures seemingly average students from vastly different worlds whose inspirational growth shows that no child's future is predestined.

Here are some of the words shared by the child pen pals featured in "Brownstones to Red Dirt."

The Life in Africa is hard and difficult, but I thank God.

They lost their parents because of the war and all of them died.

I want you to be my friend.

I will be her friend, and I won’t let nobody boss her around.

You here about what people are going through in other lands but when it comes from BABESn then it really hits home.

MaDear,
That's a VERY good point and one that maybe world leaders should listen to.
Thanks for commenting!
Love,
Alicia